The need to Boost Labour Income and Consumption Expenditure

The Union Budget 2022-23 has projected a fiscal deficit of 6.4% of nominal GDP, a narrowing from the 6.9% assumed in the revised estimates for the current fiscal year ending on 31st March 2022.

Trade-off between fiscal consolidation and growth:

A rather balanced approach suggests that fiscal consolidation is an expenditure switching mechanism, as shifting the expenditure from revenue to capital lays the foundation for higher growth.

Economic context for this year’s Budget:

How has the Budget fared in this backdrop?

The budget falls short of addressing the above-mentioned challenges. There are three distinct features of the fiscal consolidation process that India is observing: 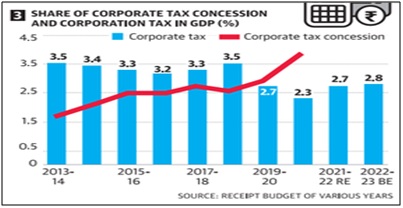 The current unemployment rates are Urban: 8 per cent, Rural: 6 per cent. In the last two years, 84 per cent of households have suffered a loss of income. As against the 12 lakh new jobs a year, the number of persons who enter the workforce every year is 47.5 lakh (source: Labour Bureau). In the workforce, the LFPR (Labour Force Participation Rate) is the proportion of the population that is presently employed or seeking employment. In India, the current numbers are workforce: 94 crores, LFPR: 37.5 per cent, equal to 52 crores (source: Economic Survey, Appendix).

In a consumption-driven economy like India, the income must reach the lower-income group that can spur the demand of goods resulting in increased consumption expenditure. Jobs generation is critical to a country like us, given the size of its young population. Jobs generate income and income results in more consumption. As the consumption increases, the demand for goods and services also increases and the manufacturers have to produce more to meet the demand, which means even more jobs gets created, exemplifying the multiplier effect.

Low labour income negatively affects macroeconomic aggregates like household consumption and savings, investments, output and demand, all of which are important ingredients for growth. In addition, low labour share makes it impossible for the workers to accumulate wealth, invest in education, skill training, housing or health. The key to the faster economic progress of India lies in income growth. At the moment Indian economy needs an effective policy that can not only give impetus to aggregate demand but also give a boost to labour income.