The Constitution makes it clear that if any question arises whether a matter falls within the governor’s discretion or not, the decision of the governor is final and the validity of anything done by him cannot be called in question on the ground that he ought or ought not to have acted in his discretion.

Many governors have been criticised for expanding their discretionary powers suo motu. Tamil Nadu (TN) governor Banwarilal Purohit has been criticised for running a parallel administration of universities within TN and appointing vice-chancellors without consulting the state government. He was already under fire for conducting “review meetings” of government schemes.

The Supreme Court’s intervention in the constitutional status of the Lieutenant Governor (L.G.) of Delhi following his tussle with the Delhi government has once again exposed the fissures in the federal structure of the country.

The five-judge bench of the Supreme Court in its judgment in Government of Delhi vs Union of India stated that the elected representative was the real executive and that the L.G. must act as per the “aid and advice” of the elected government except in matters of land, police and public order.

Situations are mentioned in Article 200, when Governor will reserve the bill, yet he can use, discretion regarding this matter.

The Governors Committee (1971) laid down the responsibility on the governor to see that the administration of the State does not breakdown due to political instability and he must send a regular report about the political situation of the State.

In such circumstances, if the Governor reports to the President a breakdown of the constitutional machinery in the State, it is clearly in accordance with his discretionary power. However, as we can see above, such powers have led to conflicts from time to time.

These are hidden discretion derived from the exigencies of a prevailing political situation:

In such cases, governor can favour one political party over others and may even elect a chief minister even with fewer supporters and ask him to prove majority in a specified time. This may even lead to horse trading and defections like it happened in Karnataka recently.

When the ministry losses support of the house, the governor will dismiss the ministry. But he cannot dismiss it until it losses majority support.

The Governor summons prorogues and dissolves the Legislative Assembly, according to article 174. When the ministry loses the majority and if the Governor is satisfied, s/he may dissolve the House.

Governor may or may not be advised by the ministry to dissolve the Assembly. In this case also, the Governor is fully entitled to act according to his discretion, in the interest of the state concerned thereby leading to conflicts.

To avoid such conflicts, there have been several recommendations by committees and judgements by various courts.

Recommendations of SC Judgements and Committees

Concerns due to abuse of power by Governor

Practice Question:
Governor is the constitutional head of the state as well as the representative of the Centre. Examine how the constitutional discretion provided to the Governor for performing this role has led to the conflicts between the states and the centres. Also, discuss how the Sarkaria and Punchhi commission recommendations can help resolve this conflict. 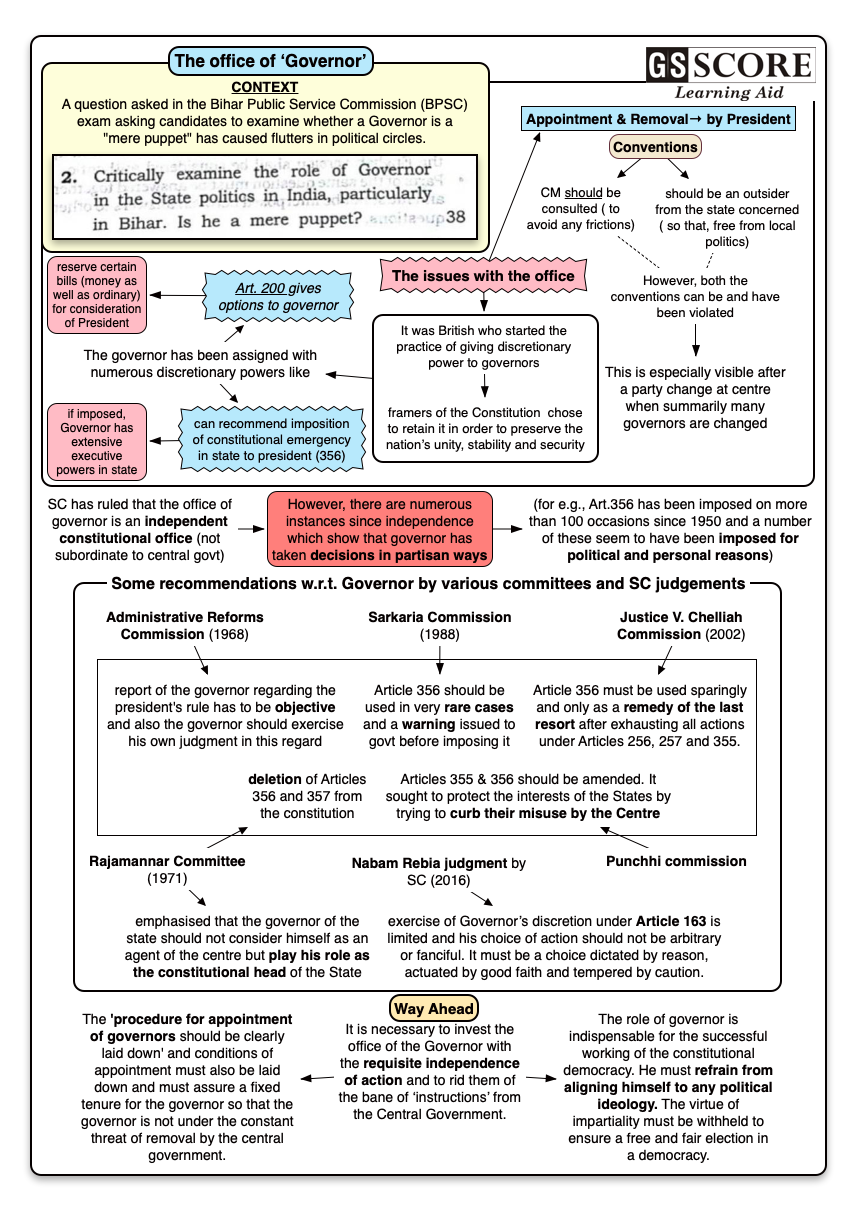 One Nation One Ration Card