Information empowers and enables people; pushes them towards exercising their legal, social, economic and political rights. It spreads awareness among citizens and creates a culture of transparency and accountability so as to make the system of governance of a nation closer to impeccability.

In India, it all started with petitions of the press to the Supreme Court, relating to issues of enforcement of the right to freedom of speech and expression. Access to information was realised as being a key tool to fight corruption and wrongdoing, the public has a right to scrutinise the actions of its leaders and engage them into a full and open debate - the free flow information is a must for a society so diverse in its mind-sets.

The Supreme Court, in State of U.P v. Raj Narain - a 1974 case, recognized the ‘right to know’ as a right inherent in Fundamental Right to freedom of speech and expression guaranteed under Article 19(1)(a) of the Constitution.

Consequently, The Right to Information (RTI) Act 2005 was thus passed to empower the citizens, promote transparency and accountability in the working of the Government, contain corruption, and make our democracy work for the people in real sense.

Under the RTI Act, 2005, Public Authorities are required to make suo moto disclosures on various aspects of their structure and functioning. This includes:

Meaning of the Term ‘Public Authorities’

We can include the recent controversy of Judiciary being under RTI

The Right to Information (RTI) Act has shown an early promise by exposing wrongdoings at high places, such as in the organisation of the Commonwealth Games, and the allocation of 2G spectrum and coal blocks. However, it now faces multiple challenges.

In issues – only IAS officers occupy the key positions,

Though these challenges were already a drag on the efficient working of Information Commissioners, the new amendments proposed by the government further dilutes the provisions and powers of RTI Act.

The Bill changes the terms and conditions of service of the CIC and Information Commissioners at the centre and in states.

</table border+'1'> Issues with the New AmendmentsThe bill threatens to dilute the autonomy of the Information Commissions at the Centre as well as states in the following ways:

Protecting citizens’ right to information is a cause important enough for adjudicating authorities to be vested with high status and security of tenure. Given the extent to which the RTI Act has empowered citizens and helped break the hold of vested interests over the administration, the law has always faced a threat from many in power. The RTI Act was a consensus law and a product of public consultation. Thus it should be strengthened rather than weakening.Way Forward

ConclusionThe RTI has unshackled millions of users who will continue to use this democratic right creatively and to dismantle exclusive power. The RTI has been and will be used to withstand attacks on it-self and strengthen the movement for transparency and accountability in India. Government will realise that while it might be able to amend a law, it cannot stop a movement.

Do you think that holding free and fair elections is more important than promoting transparency? Critically examine in light of recent amendments to the RTI Act. 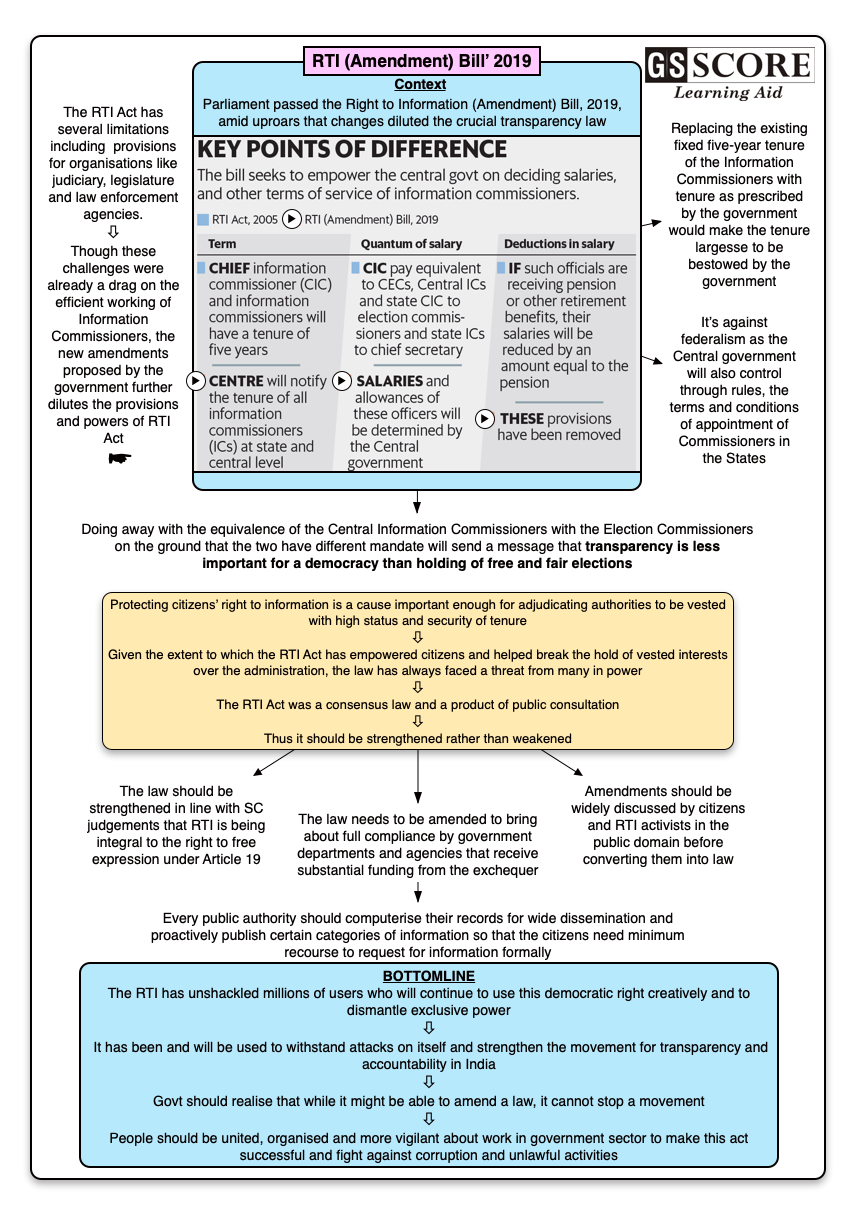