Ahom warrior Lachit Borphukan and the battles of Alaboi & Saraighat

Chief Minister of Assam had announced a number of projects in connection with the 400th birth anniversary of Lachit Borphukan.

Who was Lachit Borphukan? 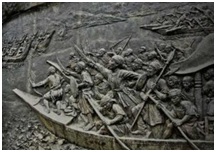