GIS and its Applications

➢ Paper Mapping Analysis with Cholera Clusters: The history of GIS all started in 1854. Cholera hit the city of London, England. British physician Dr. John Snow began mapping outbreak locations, roads, property boundaries and water lines. When he added these features to a map, something interesting happened: He saw that Cholera cases were commonly found along the water line. Dr. John Snow’s Cholera map was a major event connecting geography and public health safety. Not only was this the beginning of spatial analysis, it also marked the start of a whole field of study: Epidemiology – the study of the spread of disease. To this date, Dr. John Snow is known as the father of epidemiology. The work of John Snow demonstrated that GIS is a problem-solving tool. He put geographic layers on a paper map and made a life-saving discovery.

➢ Before 1960 (The GIS Dark Ages of GIS): Dark Ages GIS Computer mapping was in the dark. It was not developed. All mapping was done on paper or sieve mapping. The technology wasn’t here for GIS to come to light. In the 1950s, maps were simple. They had their place in vehicle routing, new development planning and locating points of interest. But none of this was done on computers. Imagine a world without computer mapping. With all the issues that came with paper maps, it was no surprise that cartographers and spatial users wanted to explore computing options for handling geographic data.

➢ 1960 to 1975 (Pioneering time of GIS): in the history of GIS, this was the main incentive to shift from paper to computer mapping. The early 1960 to 1980s was really the time period of GIS pioneering. The pieces were coming together with advancements in technology:

➢1975 to 1990 (Commercialization of GIS Software): As governments realized the advantages of digital mapping, this influenced the work of the Harvard Laboratory Computer Graphics. In the mid-1970s, Harvard Laboratory Computer Graphics developed the first vector GIS called ODYSSEY GIS. ESRI’s ARC/INFO used the technical framework from ODYSSEY GIS and this work led to the next stage of development in GIS – software commercialization. o In the late 1970s, memory size and graphics capabilities were improving. New computer cartography products included GIMMS (Geographic Information Making and Management Systems), MAPICS, SURFACE, GRID, IMGRID, GEOMAP and MAP. In the late 1980s, this segment of GIS history was marked with an increasing range of GIS software vendors.

➢ 1990 to 2010: (User Proliferation): Map Collaboration Users are starting to adopt GIS technology in different ways. Classrooms, businesses, governments around the world are starting to harness digital mapping and analysis. All the ingredients were ready for the infiltration of GIS to the people:

➢ 2010 to Onward (The Open Source Explosion): Open Mapping With users getting accustomed to GIS software, this has sparked a new revelation in GIS – an open source explosion. 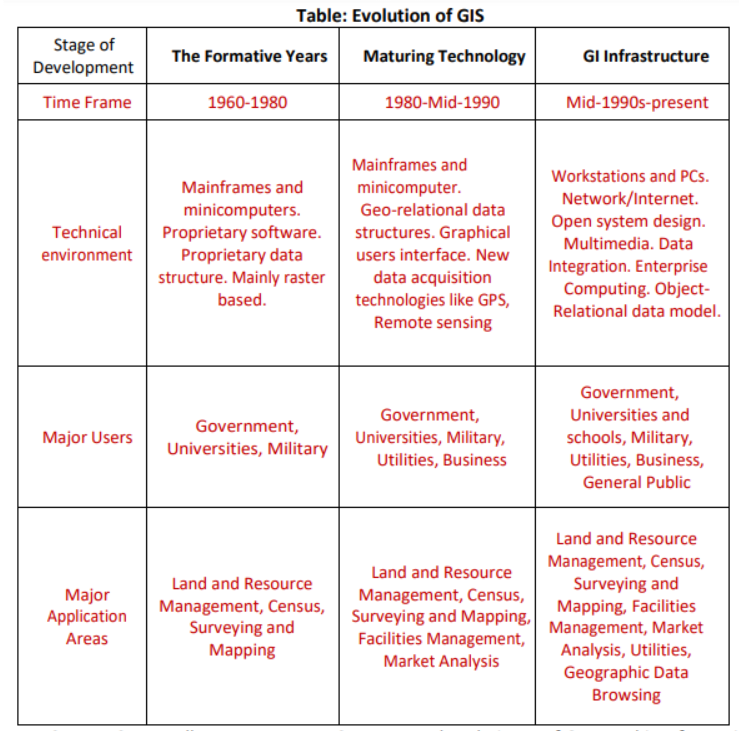 At a broad range of scales, map has become increasingly important as legal document that convey land ownership and jurisdictional boundaries, as tools to support decision making (For example, in urban planning). The GIS provides the ability to completely model utility networks, such as those supplying water, power and telecommunications to a large number of consumers. Such a system may operate at a variety of scales, modeling service Connections to consumers, service districts as well as detailed facilities inventories and layouts, such as transformers, valves conduits, and schematic diagrams. Applications of the GIS are listed below:

Environmental uses: GIS is used in a wide range of practical environmental issues from global warming and sea level rise to erosion, flooding and soil, air and water pollution.

GIS can lead to new ways of thinking about and dealing with old problems, because the data is tied to a common referencing system, it is easy to use the same data to various applications as well as to associate diverse data sets previouslyunavailableforjointanalysis.Topologypermitsnewquestionsto be asked and encourages a n e w style of analysis that is in many cases fundamentally better than those used traditionally. GIS provides the following benefits: