AIDS as a global concern

The Joint UN programme on AIDS, commonly known as UNAIDS, is facing one of the worst challenges afflicting the global AIDS response — this time an existential threat questioning its very relevance.

Considering AIDS as a 'Global concern', this article intends to comprehensively review causal factors and treatment mechanisms - with more focus on community response.

In 2017, HIV prevalence among adults (aged 15-49) was an estimated 0.2%. This figure is small compared to most other middle-income countries but because of India's huge population (1.3 billion people) this equates to 2.1 million people living with HIV.

Despite the recent mobilization of donor funds, resources are strained, and the capacity of the health care systems to absorb the increasing treatment load is precarious.

Ensuring adequate institutional and human resources to meet the challenges of HIV/AIDS in 10 to 15 years into the future will therefore require visionary strategic planning and investments in capacity building - more so with the active assistance of Community led participation.

Before one digs deeper into the subject, it is desired to run through some important bodies and programmes - concerning AIDS.

The National AIDS Control Programme (NACP), launched in 1992, is being implemented as a comprehensive programme for prevention and control of HIV/AIDS in India. Over time, the focus has shifted from raising awareness to behavior change, from a national response to a more decentralized response and to increasing involvement of NGOs.

UNAIDS is working towards stopping new HIV infections, ensuring that everyone living with HIV has access to HIV treatment, protecting and promoting human rights and producing data for decision-making.

This Political declaration was adopted by Member States at the United Nations General Assembly High-Level Meeting on Ending AIDS epidemic by 2030 within the framework of the Sustainable Development Goals.

People centric policies and programmes drive in success. The current section will take a nuanced approach in finding the efficacy of community driven approaches and the course correction pathways.

India’s efforts to promote safe sex among such people will play significant role in determining the success of its campaign.

This argument is strengthened by the fact that India witnessed a decline of HIV prevalence among MSM from 7.41 per cent in 2007 to 4.43 per cent in 2011.

Importance of Community participation in HIV research and treatment:

This is dependent upon following  Community participation in letter and spirit, i.e. -

Trials/investigators should engage and create partnerships with stakeholder groups within the host community as well as with those at the national level, and build their capacity to understand and engage meaningfully with the research process

Trials/investigators and global/international advocacy groups should work together in future trials to identify grassroots-level contact persons who they should nurture early in the trial process into community advocates to promote awareness, mobilize the community, monitor trial progress, and provide feedback from the community

Local leaders, politicians and opinion leaders should invest time and resources in understanding trial processes, and seek partnerships with trial investigators and advocates in their communities

Future trials should consider broadcasting and publishing an official public statement of research results in the mass media, with a clear and full explanation of the key messages.

Factors that determine success of community approach in India

Based upon the experiences of a pilot project established by the Tamil Nadu State Government AIDS Cell and WHO, the researcher found that the organization of the commercial sex trade in Madras was not highly conducive to collective action.

Identifying factors that have frustrated attempts to promote community-based strategies in the city, the paper suggests that this approach is unlikely to succeed unless there are significant changes to the institutional arrangements that keep sex workers in a position of subordination and exploitation.

Hence, for the Community participation to succeed , the societal actors - the affected people must feel internalized and not be treated like an outcaste.

Community Solution can also aid in times of funding crisis:

India relied on others’ money to run its NACP programme. Earlier, World Bank and many other global groups were giving funds. When the outside support dried up, India started deploying larger share of its own money. But it covered only 50 per cent of total expenditure.

The country needed to find a way to raise resources from within the country. It did so by asking State and civil society to contribute some money.

Currently, ART can reduce HIV viral burden and infectiousness although it does require strict adherence to daily medications. What could an HIV cure offer beyond this? In the medical community, a cure could be HIV remission (living with HIV without HIV RNA detected in the blood), or HIV eradication (no HIV in the body and completely HIV negative).

However, it is not well understood what HIV cure means to those within the community who are at risk of HIV but have never been tested or still test negative, to those who are currently living with HIV with and without ART, and to those who are diagnosed early or late.

The word ‘cure’ certainly has different meanings for different people: from living with HIV without the risk of transmitting the virus to others, to living without any traces of HIV in the body.

Summing up - from top down to decentralized approach and challenges foreseen 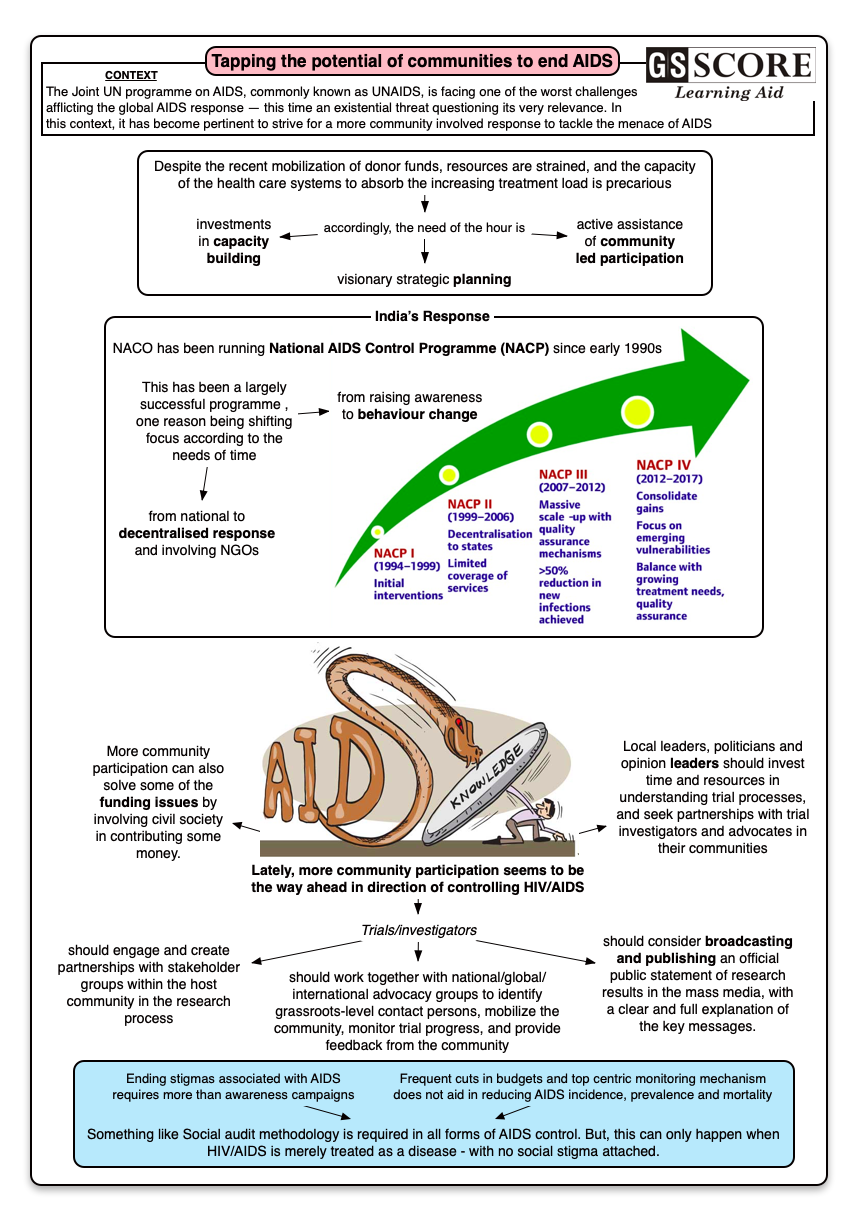