The Bill relaxes the 11-year requirement under ‘Citizenship by Naturalisation’ principle to six years for persons belonging to the minority religions from the three neighbouring countries.

The Bill, also, provides that the registration of Overseas Citizen of India (OCI) cardholders may be cancelled if they violate ‘any law’ of the country.

Citizenship defines the relationship an individual share with the political community (a nation or a country) and signifies their full & equal membership of that community. It also defines their relationship with the State like various duties, responsibilities, and rights.

The conferment citizenship of India is governed by Articles 5 to 11 of the Constitution of India. The Citizenship Act, 1955 regulates the grounds of acquisition of Indian citizenship and by whom.

A person may become an Indian citizen 1) by birth, 2) by descent, 3) by registration, or 4) by naturalisation. However, illegal migrants are prohibited from acquiring Indian citizenship under the Act.

Two notifications of the Government of India in year 2015, and 2016, have already precluded people belonging to these religious groups from being considered under the definition of illegal migrants under Foreigners’ Act, 1946 and Passport Act, 1920 for the purpose of granting citizenship. These groups of illegal migrants will not be deported or imprisoned for being in India without valid documents.

Who are Illegal migrants?

An illegal migrant is defined under Foreigners’ Act, 1946 and is a foreigner who: (i) enters the country without valid travel documents, like a passport and visa, or (ii) enters with valid documents, but stays beyond the permitted time period.

Illegal migrants may be imprisoned or deported under the Foreigners’ Act, 1946, and the Passport (Entry into India) Act, 1920 as these Acts empower the central government to regulate the entry, exit, and residence of foreigners within India.

Changes through the Bill: The amendment seeks to remove people belonging to the six minority religious groups in neighbouring countries from consideration as illegal migrants.

However, to get the benefits of citizenship under the citizenship Act, these groups would also be required to be exempted from the Foreigners Act, 1946 and the Passport (Entry into India) Act, 1920 by the central government.

The 1955 Act allows a person to apply for Citizenship by Naturalisation if the person has resided in India or served the central government for a certain period of time: 1) for the 12 months immediately preceding the application for citizenship, and 2) for 11 of the 14 years preceding the 12-month period.

Changes through the Bill: The 11-year time period is sought to be relaxed and reduced to 6 years for the aforementioned religious groups.

A foreigner may register as an OCI under the 1955 Act if they are of Indian origin (e.g. former citizen of India or their descendants) or the spouse of a person of Indian origin.  This will entitle them to benefits such as the right to travel to India, and to work and study in the country.

The 1955 Act provides that the central government may cancel registration of OCIs on certain grounds, including: (i) if the OCI had registered through fraud, or (ii) if within five years of registration, the OCI was sentenced to imprisonment for two years or more.

Changes through the Bill: The Bill adds one more ground for cancelling registration which is- if an OCI cardholder has violated ‘any law’ in the country.

What is National Register of Citizens (NRC) and its concern?

NRC is a register prepared and published by the Assam government after the census 1951 in each of the villages, showing houses/house-holdings in a serial order, indicating the names and average number of people staying there. It grants citizenship to the illegal migrants who have entered India before 24th March, 1971.

The current up-dation of NRC is being done under the orders of honourable Supreme Court as per the ‘Citizenship, Registration of Citizens and National Identity Card Rules, 2003’ under the provisions of Citizenship Act, 1955.

Under the section 6A of Assam Accord, detection and deportation of all illegal migrants is to be done who have entered India after the cut-off date of 24th March, 1971. The provision of detention in the detention centres for the illegal migrants under the Foreigner’s Act 1946 is also there.

However, the Amendment Bill seeks to preclude the six religious’ groups from consideration under the definition of ‘illegal migrants’ and hence, preventing their detention and deportation despite them not being there in the updated NRC.

Thus, the Bill and NRC are in juxtaposition to each other over the issue of illegal migrants from the six minority religious groups from Bangladesh, and it has created an air of tension in the state of Assam.

Other areas of concern:

The recent citizenship (Amendment) bill, 2016, goes against the basic tenets of the constitution. Do you agree? Substantiate your answer by highlighting the key features of the Bill. 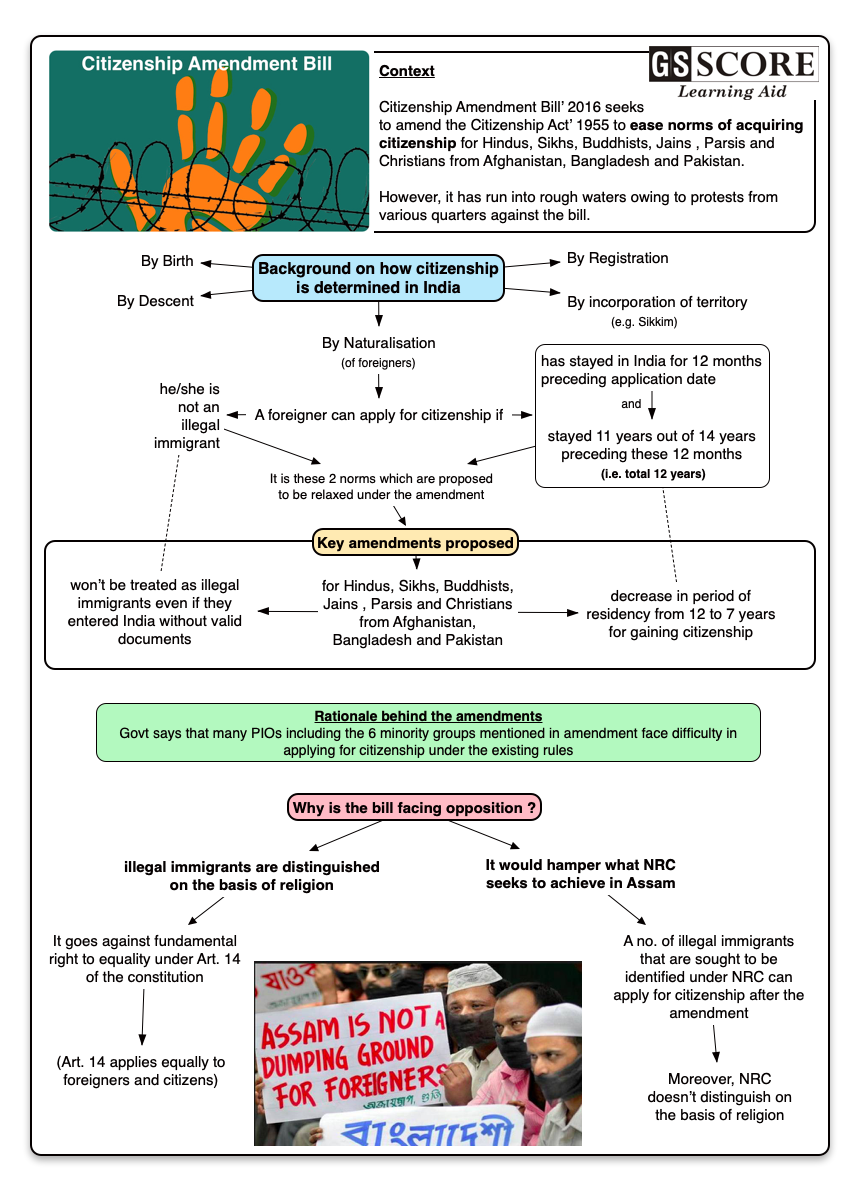