In her recent speech at the 71st session of United Nations General Assembly (UNGA), foreign minister SushmaSwaraj appealed the global community for early adoption of the Comprehensive Convention on International Terrorism (CCIT).

Objectives of draft CCIT as proposed by India:

Despite India’s efforts to push a global intergovernmental convention to tackle terrorism, the conclusion and ratification of the CCIT remains deadlocked, mainly due to opposition from three main blocs – The US, the Organization of Islamic Countries (OIC), and the Latin American countries.

India has been a victim of cross-border terrorism for the last 40 years. It has taken cognizance of the threat terrorism poses to international peace and security long before the major world powers. Far from conclusion, India needs to keep lobbying overtime so that global community acts with fresh resolve and urgency inadaptation of this critical Convention

The CCIT is currently being discussed at the Sixth Ad Hoc Committee of the United Nations. The committee is the primary forum for the consideration of legal questions in the UNGA

CCIT in a nutshell: 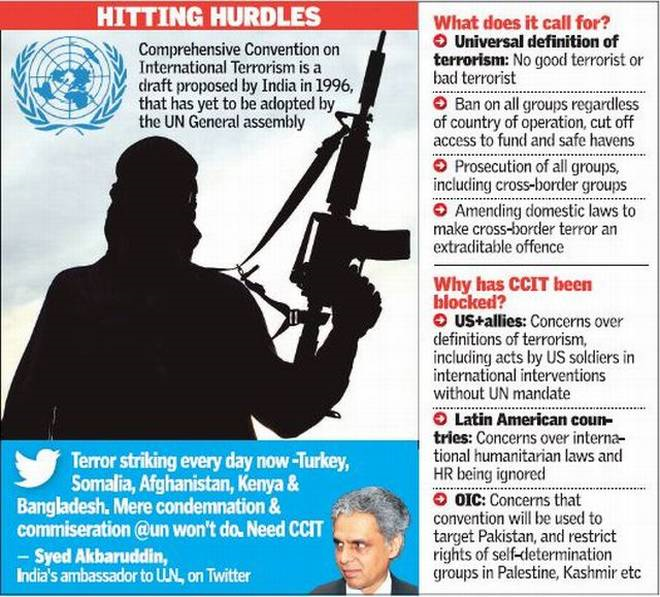 The Comprehensive Convention on International Terrorism is a proposed treaty which intends to criminalise all forms of international terrorism and is indeed the need of the hour. Despite this, there has been a deadlock in its acceptance. In the light of this statement, analyse why the treaty’s adoption is important for India. Also, discuss challenges in its adoption.