Data localization is a measure adopted to give countries increased control over the data    belonging to their citizens and residents. Due to the transient and pervasive nature of data on the internet, its security is constantly threatened and indeed been breached at several instances. Data localization is therefore conceived as means of enforcing data protection regime to secure data of the citizens and the critical interests of the nation state. This is achieved through:

Data localization has become an indispensible aspect of the data protection regime of the modern nation-states in the era of digitalization and ubiquitous presence of internet. China, Russia, Australia, Canada, European Union and several other countries have already adopted data localization provisions. In this respect it becomes imperative for India to devise policy and regulatory framework consistent with current international practices to protect and localise data.

Presently, there are neither existing specific regulations nor any vested body for data protection in India. The digital era has triggered concerns about data protection. For mitigating against privacy concerns and national security concerns, the Indian legislature and governments have over the years passed some laws in this regard:

Need for data localisation in India

Following are some of the reasons for reinvigorated data protection law:

Arguments in favour of data localisation

Safety of the data: Restricting service providers to use the infrastructure within a limited geographical territory increases the threats to data security. This is because the internet enables centralized data storage and processing, taking advantage of economies of scale and a seamless, global internet.

Data versus Data Center – Jurisdiction: Mere location of a data center within the physical jurisdiction of a country does not entitle law enforcement agencies to have better access to data held by such centers. Access to data depends on who has custody, control and possession of the actual data - and that may not necessarily be with the entity that provides the local hosting facility.

Localizing data center does not curtail vulnerabilities: Data destruction doesn't always require a continent-scale event. For instance, a slow water drip in an office building in Calgary, Alberta set off an explosion that caused days of computer outages for hospitals, ambulances, radio stations, taxis, and criminal justice facilities around the province.

Threat of domestic surveillance: By extension of the same argument as the advocates of data localization, local government may exercise greater coercive power over domestic businesses storing data to circumvent legal protections.

Cost of Localization: Policymakers have not grappled with the substantial costs of reorganizing and relocating data and operating new data centers, which could discourage if not bar investment, especially from small and medium enterprises (SMEs). The Indian public cloud services market is set to more than double to $7 billion by 2022. According to estimates, Enterprise spending on data centre infrastructure software will rise 10% to $3.6 billion in 2018.

Reduced quality of services: Data localization could significantly reduce the quality of the services Indian consumers receive by depriving companies of the scale and efficiencies of global networks and restricting the volume of data from which companies can extract insights to improve their services. 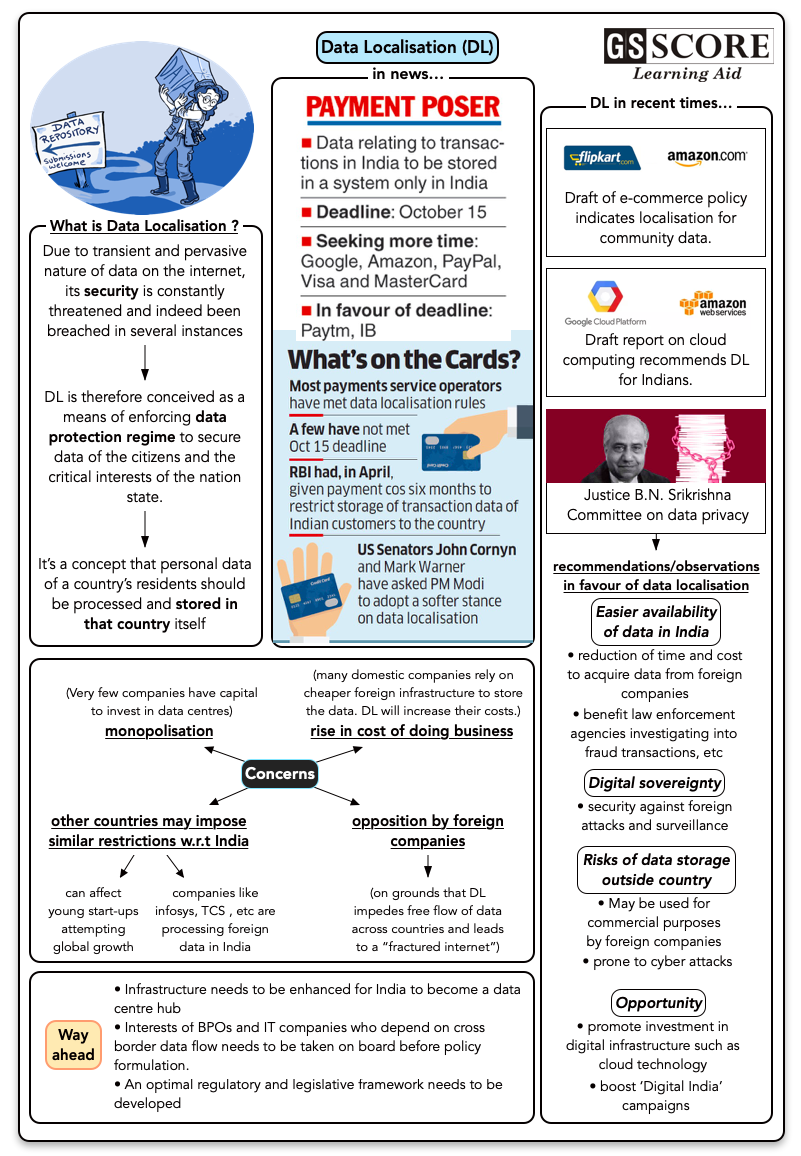