How Malappuram topped the list of world’s ‘fastest growing cities

The Economist put Malappuram at the top of the “Top ten fastest-growing cities” in the world, based on “Total % change, 2015-20 forecast”. The list is based on data from the United Nations Population Division.

Does “fastest growing” refer to population? How is a “city” defined?

How does urban population grow?

Could migration have caused the increase? 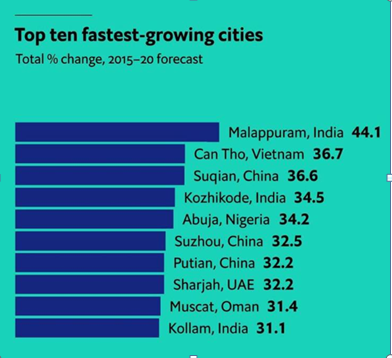 Why is this not seen elsewhere in India?

But is this kind of increased urbanisation good for the economy? /Way forward