A petition was filed by two Rohingya men against the government’s proposed move to deport their 40,000-strong community back to their native land of Myanmar. In this backdrop, the Supreme Court is now examining, whether the illegal immigrants can even be considered for ‘refugee’ status or not.

A petition was filed by two Rohingya men against the government’s proposed move to deport their 40,000-strong community back to their native land of Myanmar. In this backdrop, the Supreme Court is now examining, whether the illegal immigrants can even be considered for ‘refugee’ status or not.

India is often described as a land of migrants, which over centuries, has attracted streams of immigrants from different races and cultures and assimilated them to build a composite civilisation.

India has been witnessing immigration since independence. People who have faced religious and political persecution, economic and social discrimination, cultural repression and curbs on personal freedom have made India their home.

Many others have entered India to escape abject poverty and economic stagnation in their country, and to build a better future for themselves. Of all kinds of migration, illegal migration has become the most volatile and contentious issue in Indian polity today because of the socio-political conflicts it has brought in its wake. Illegal migration comprises of people across national borders in a way that violates the immigration laws of the destination country.

Refugees are persons who are outside their country of origin for reasons of feared persecution, conflict, generalized violence, or other circumstances that have seriously disturbed public order and, as a result, require international protection.  The refugee definition can be found in the 1951 Convention and regional refugee instruments, as well as UNHCR’s Statute.

While there is no formal legal definition of an international migrant, most experts agree that an international migrant is someone who changes his or her country of usual residence, irrespective of the reason for migration or legal status. Generally, a distinction is made between short-term or temporary migration, covering movements with a duration between three and 12 months, and long-term or permanent migration, referring to a change of country of residence for a duration of one year or more.

An asylum-seeker is a person who has left their country and is seeking protection from persecution and serious human rights violations in another country, but who hasn’t yet been legally recognized as a refugee and is waiting to receive a decision on their asylum claim. Seeking asylum is a human right. This means everyone should be allowed to enter another country to seek asylum.

Pattern of Illegal Migration since Post-Independence

Reasons for Illegal Migration in India

Impact of Illegal Migration in India

Such a huge influx of illegal migrants has had grave consequences on the socio-cultural, economic and political life of the receiving states.

Response by the Government

Since the threats and challenges to the stability and security of the country as a result of illegal migration were varied, the state response to them was also a mix of targeted interventions.

Even though India is not a signatory to the 1951 Convention on refugees and also the 1967 Protocol, it is a signatory to a number of United Nations and World Conventions on Human Rights, refugee issues and related matters. Hence its obligations in regard to refugees arise out of the latter. India has also voted affirmatively to adopt the Universal Declaration of Human Rights, which affirms rights for all persons, citizens and non- citizens alike. 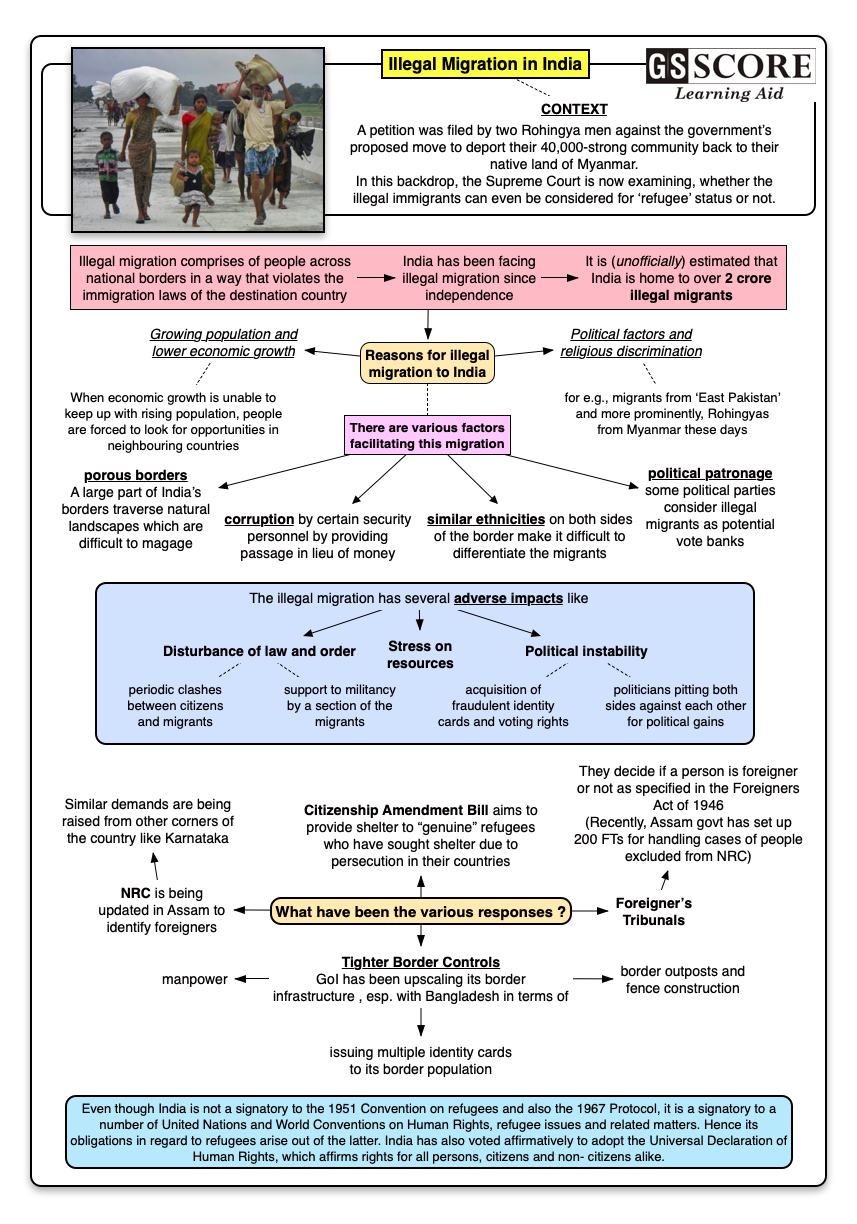