Fire incidents take place due to:

Other factors which act as catalyst:

If one analyses the findings, it appears that sufficient warnings were issued to the oversight bodies to conduct pre-emptive investigations and seal errant buildings, workshops etc to prevent cases of fire accidents.

However, the action consequences were marred by long pendency, sever understaffing, fund crunch, corruption and inability of these bodies to bring the culprits to the books of law.

National Building Code of India covers the detailed guidelines for construction, maintenance and fire safety of the structures.

Fire Safety Audit (FSA) is found to be an effective tool to assess fire safety standards of an organization or occupancy.

It is aimed to assess the building for compliance with the National Building Code of India, relevant Indian standards and the legislations enacted by state governments and local bodies, on fire prevention, fire protection and life safety measures.

FSA should be made mandatory all over India and the work should be entrusted to independent agencies. It is reasonable to have a fire safety audit every year.

In India, although there are many rules and regulations, codes and standards related to fire safety, these are seldom followed.

How to prevent fire accidents?

Has the lesson been learnt?

Days after a fire tragedy killed 17 people at a hotel in Karol Bagh, the Delhi government approved certain amendments to the Delhi Building By-Laws 2016 to enhance fire safety.

While legislative actions give way to directions what is crucial is to ensure their executive compliance. The accidents may happen, what is important to prevent their “can happen” phenomena.

This is possible only when the agencies and oversight bodies perform their job honestly.

Sense of urgency within the relevant state agencies, coupled with a general understanding of fire safety awareness among people in India are the two prime movers which can reduce instances of deadly fire accidents in India.

Fire service is a state subject and has been included as municipal function. However, Municipalities are suffering from funds, functionaries and strong teethed law. Is the fire safety itself in need of rescue and rehabilitation? Discuss in reference to recent events of fire accidents that happened in Delhi and Mumbai. 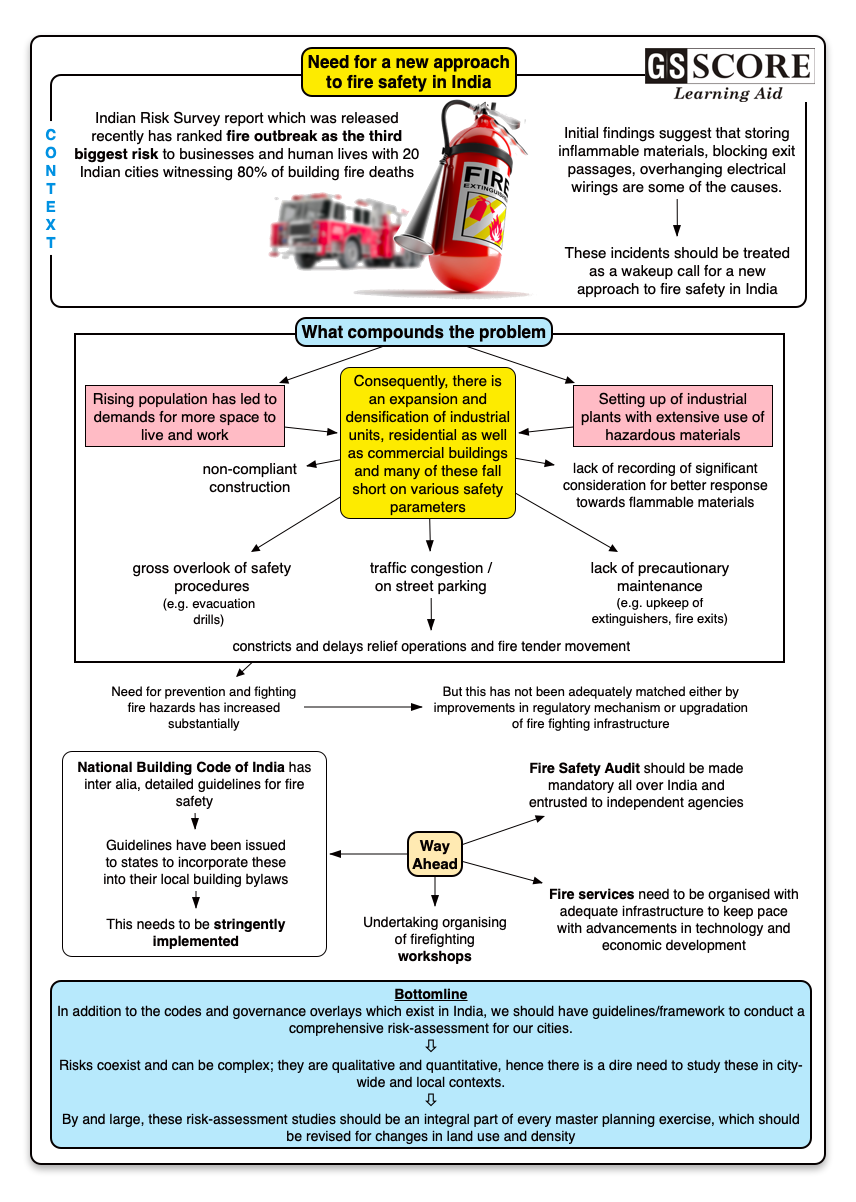