MGNREGA in times of COVID-19

The Mahatma Gandhi National Rural Employment Guarantee Act (MGNREGA) has been one of the main avenues for the Centre to provide employment to returning migrants and others in rural areas who have been rendered jobless due to the lockdown.

What is the current situation? 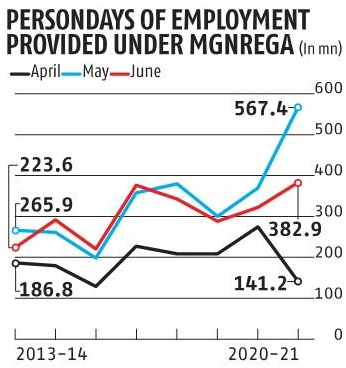 The government has done the right thing by stepping up allocations both for MGNREGA and PDS grains. But in the end, MGNREGA cannot be any more than a scheme that provides employment during the agricultural lean season for landless labourers and marginal cultivators. Now, the focus has to be on getting people, including the migrant labourers, back to normal work.Also, it may be inferred that above suggestions, if taken care of, will definitely make MGNREGA a real instrument for overall rural upliftment, in general & improve the lot of the rural poor s, in particular.