National Year of Millets: Recognition of the most nutritious and healthy cereal

India is celebrating 2018 as the National Year of Millets and is promoting cultivation by amending cropping pattern of areas which are especially susceptible to climate change. Government recently increased the MSP of millets by more than 50 per cent of cost of production which is an important component of efforts to achieve the national commitment of doubling farmers’ income by 2022.

Context:
India is celebrating 2018 as the National Year of Millets and is promoting cultivation by amending cropping pattern of areas which are especially susceptible to climate change. Government recently increased the MSP of millets by more than 50 per cent of cost of production which is an important component of efforts to achieve the national commitment of doubling farmers’ income by 2022.

The Central Government in 2017 had decided to start distributing millets under Public Distribution System (PDS) to improve nutritional security. Subsequently, the committee under the Chairmanship of Prof. Ramesh Chand, Member, NITI Aayog was held, wherein it was decided to promote millets viz. Jowar, Bajra, Ragi through PDS across the country to improve nutritional content in the diet of people.

On the basis of the recommendations of NITI Aayog, it has been decided to create a sub mission on Nutri-cereals instead of the existing NFSM-Coarse Cereals. National Food Security Mission (NFSM) -Coarse Cereals are divided into two components: NFSM (Makka and Jau) and Sub Mission on Nutri-Cereals covering Jowar, Bajra, Ragi and little millets like Kutki, Kodo, Sawa, Kangni and Cheena.

Nutrition: Nutritionally superior to wheat & rice owing to their higher levels of protein with more balanced amino acid profile, crude fiber & minerals such as Iron, Zinc, and Phosphorous, millets can provide nutritional security and act as a shield against nutritional deficiency, especially among children and women. The anaemia (iron deficiency), B-complex vitamin deficiency, pellagra (niacin deficiency) can be effectively tackled with intake of less expensive but nutritionally rich food grains like millets.

Anti-diabetes quality: Millets can also help tackle health challenges such as obesity, diabetes and lifestyle problems as they are gluten free, have a low glycemic index and are high in dietary fibre and antioxidants. Millet ingestion helps in a slower release of glucose over a longer period of time; thus, due to low glycaemic index (GI), their habitual intake reduces the risk of diabetes mellitus.

Millets are also rich in phytochemicals (polyphenols, tannins, and phytosterols) and antioxidants; however, they do contain some anti-nutritional factors that can be reduced by certain processing treatments.More relevant due to climate change: Adapted to low or no purchased inputs and to harsh environment of the semi-arid tropics, they are the backbone for dry land agriculture. Photo-insensitive & resilient to climate change, millets are hardy, resilient crops that have a low carbon and water footprint, can withstand high temperatures and grow on poor soils with little or no external inputs. In times of climate change they are often the last crop standing and, thus, are a good risk management strategy for resource-poor marginal farmers.

More sustainable: Besides, millets help in reducing the atmospheric CO2 and thus contribute in mitigating the climate change. On the contrary, paddy is a major contributor to climate change through methane emission (the green-house gas emanating from water-drenched rice fields). Wheat being a thermally sensitive crop, with increasing temperatures, its production is liable to be adversely affected. Thus, in due course, wheat might disappear from our farms.

Millet production is not dependent on the use of chemical fertilizers.  These crops do not attract pests; and majority of the millets are not affected by storage pests; thus, the use of pesticides is not mandated.

Food security: Although among the food crops, millets occupy relatively a lower position in Indian agriculture, they are quite important from the point of food security at regional/household level.  Millets can not only grow in poor soil/climatic conditions, due to their short growing season, these can very well fit into multiple cropping systems under irrigated as well as dry land farming; and provide  nutritious  grain  as well as  fodder  in  a  short  span. Their prolonged and easy storability under ordinary conditions has accorded them the status of “famine reserves”; and this feature is of great relevance for India, as our agriculture suffers from the vagaries of    monsoon.

Problems with Millets production in India

Millets Shortage and decline in farmer’s interest in them:

Millets are cultivated in low-fertile land, mountainous, tribal and rain-fed areas. These areas include Andhra Pradesh, Chhattisgarh, Gujarat, Haryana, Madhya Pradesh, Rajasthan, Maharashtra, Karnataka, Uttar Pradesh, Tamil Nadu and Telangana. In the pre-Green Revolution era, in 1965-66, millets were cultivated in 36.90 million hectares. In 2016-17, the area under millet cultivation declined to 14.72 million hectares (60% less coverage area) due to change in consumption pattern, dietary habits, unavailability of millets, low yield, less demand and conversion of irrigated area for cultivation of rice and wheat. As a result of this, nutrients like protein, Vitamin-A, iron and Iodine levels fell in women and children. Production of millets will definitely help in providing nutritional value, especially to the poor. Besides providing nutritional security, it also helps in preventing malnutrition.

Despite numerous qualities, utilization of millets as food is confined to the traditional consumers, particularly the tribal populations. This is mainly due to the non-availability of consumer friendly, ready-to-use/ready-to-eat millet based products. Recently, millets have gained attention and efforts are under way to obtain their convenient and value added processed products.

Millets along with rice, wheat and pulses/oilseeds can be used to produce nutritious food products such as porridges,  chapattis, breads,  ladoos, pastas, biscuits, cookies, cakes, and several fermented foods including probiotic drinks.  After dehulling, millets can be simply cooked like rice and their flour can substitute rice flour in preparing various snack items. Fermented batters of millets and black gram (3:1) can be used for making idli, dosa or uttapam. Ragi and refined wheat flour blends (1:2) can be used for making highly acceptable noodles/vermicelli which are hypo-glycaemic too.

Traditional methods of cereal processing (popping and flaking) as well as the contemporary ones (roller drying/extrusion cooking) can be successfully employed for preparing various millet based ready-to-eat products. Thus, a variety of extruded millet-cereal-pulse snacks can be prepared commercially for easy availability and wider use. Similarly, millet-cereal-pulse blends can be used in preparing murukus, papads, vadiyan, bhujia, vermicelli, spaghetti, noodles, macaroni etc. Various millet blends along with wheat can be used for making multi-grain flour, baked products like biscuits, cookies, breads, buns, rusks, cakes and muffins. Sorghum (Jowar) malt is being used for preparing the infant foods. Since extrusion processing lowers the anti-nutritional factors and enhances digestibility of the millets; extruded millet products can be promoted as healthy snacks/ health foods.

Partially processed millet products – ready to cook/instant foods, can be made available in the market; due to ease in preparation, these can promote millet consumption and thus, create a demand for these nutritious grains and simultaneously reduce the reliance on staples like rice and wheat. 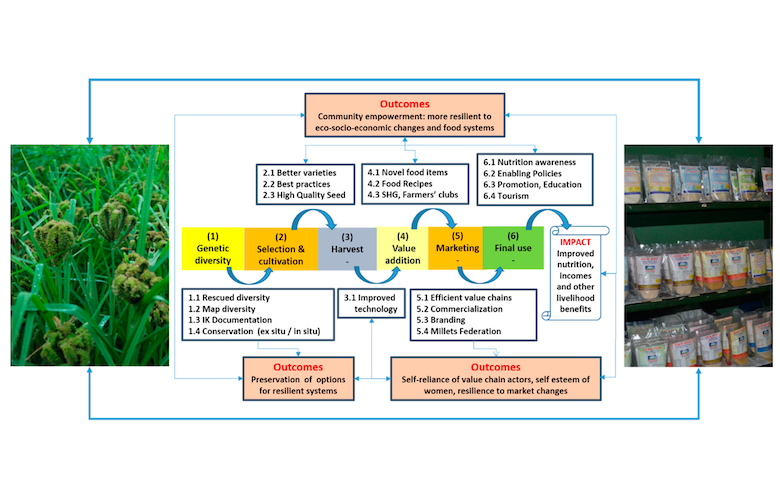 Millets are likely to emerge as next super-foods on the lines of green-tea, oats, etc; yet their area under cultivation is shrinking fast. Elaborate and suggest how India can push production and consumption of Millets.

SC/ST benefits can be claimed ONLY in one State: Supreme Court

Increasing rate of unemployment amid surge in Covid-19 cases