As per a research published in journal ‘Science”, oceans are heating up 40 percent faster on average than Intergovernmental Panel on Climate Change (IPCC) estimated five years ago.

What is ocean warming?

As the oceans heat up, sea levels rise because warmer water takes up more space than colder water. As per this report, most of the sea level rise observed to date is because of this warming effect, not melting ice caps. The warming alone would cause sea levels to rise by about a foot by 2100, and the ice caps would contribute more. That could exacerbate damages from severe coastal flooding and storm surge.

Ocean warming leads to deoxygenation – a reduction in the amount of oxygen dissolved in the ocean – and sea-level rise – resulting from the thermal expansion of sea water and continental ice melting. The rising temperatures, coupled with ocean acidification (the decrease in pH of the ocean due to its uptake of CO2), affect marine species and ecosystems and, consequently, the fundamental benefits humans derive from the ocean.

WHAT ARE THE IMPACTS?

On marine species and ecosystems

Reefs around the world have suffered from mass bleaching events for three consecutive years. The bleaching of the Great Barrier Reef in 2016 and 2017, for instance, killed around 50% of its corals.

Corals cannot survive the frequency of current bleaching events from global temperature rise. If temperatures continue to rise, bleaching events will increase in intensity and frequency. The first global scientific assessment of climate change impacts on World Heritage coral reefs, published in 2017 by UNESCO, predicts that the coral reefs in all 29 reef-containing World Heritage sites would cease to exist as functioning coral reef ecosystems by the end of this century if humans continue to emit greenhouse gases under a business-as-usual scenario.

Rising temperatures also affect vegetation and reef-building species such as corals and mangroves, which protect coastlines from erosion and sea-level rise. Rising sea levels and erosion will particularly affect low-lying island countries in the Pacific Ocean, destroying housing and infrastructure and forcing people to relocate. Kiribati, The Maldives, The Seychelles, The Torres Strait Islands, Tegua, The Soloman Islands, Micronesia, Palau, The Marshall Islands, The Carteret Islands, Tuvalu and Bangladesh are among the worst sufferer of ocean warming.

The rise in sea surface temperatures is causing more severe hurricanes and the intensification of El Niño events bringing droughts and floods. Powerful storms like Hurricane Harvey (2017) and Hurricane Florence (2018) will become more common, and coastlines around the world will flood more frequently.

WHAT CAN BE DONE?

Paris Agreement on climate change sets mitigation targets and holds the increase in the global average temperature to well below 2°C above pre-industrial levels. This will help prevent the massive and irreversible impacts of growing temperatures on ocean ecosystems and their services.

Well-managed protected areas can help conserve and protect ecologically and biologically significant marine habitats. This will regulate human activities in these habitats and prevent environmental degradation.

Elements of ecosystems that have already experienced damage can be restored. This can include building artificial structures such as rock pools that act as surrogate habitats for organisms, or boosting the resilience of species to warmer temperatures through assisted breeding techniques.

Governments can introduce policies to keep fisheries production within sustainable limits, for example by setting precautionary catch limits and eliminating subsidies to prevent overfishing. Coastal setback zones which prohibit all or certain types of development along the shoreline can minimise the damage from coastal flooding and erosion. New monitoring tools can be developed to forecast and control marine disease outbreaks.

Governments can increase investments in scientific research to measure and monitor ocean warming and its effects. This will provide more precise data on the scale, nature and impacts of ocean warming, making it possible to design and implement adequate and appropriate mitigation and adaptation strategies.

India has a vast coastline of 7,525 km, almost all of which are to some extent affected by coastal erosion. About 26 percent of the mainland coastline in India face serious erosion problems. Infrastructure projects such as jetties, ports, big road projects, dredged navigational channels, and the destruction of vegetation on the shoreline have all played a role in making the population living the coastal areas and depending on coastal resources highly vulnerable.

The impacts of climate change and sea level rise pose serious threats to coastal regions. The sea level along the Indian coast has been rising at the rate of 1.3mm/year. The 2004 tsunami and severe cyclones created a sudden awareness about coastal protection among policy makers.

Steps taken by the GOI to preserve coastal ecosystems:

Analyze the findings of IPCC regarding climate change and examine the doubts and anomalies raised by other experts in the same. 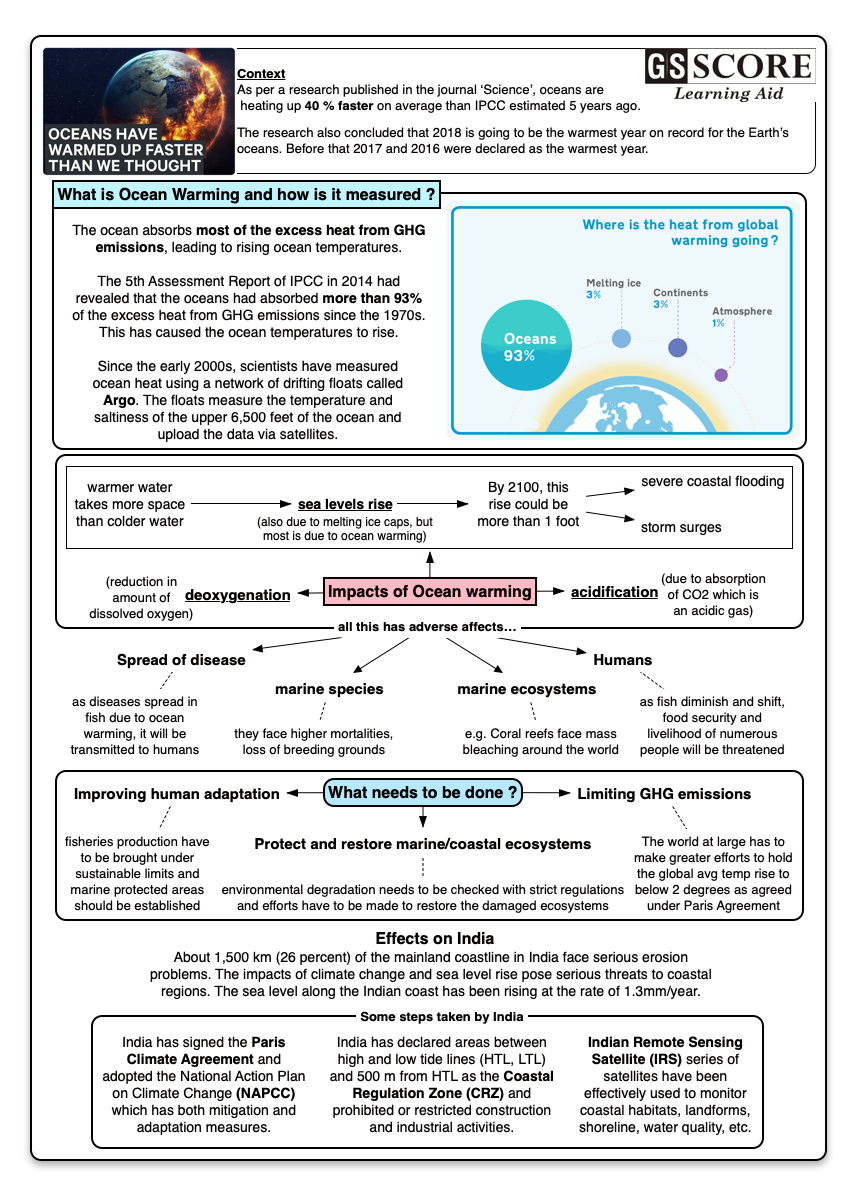