What is the bone of contestation between the microblogging platform and the Central government?

What kind of content has fallen under the purview of Section 69A? 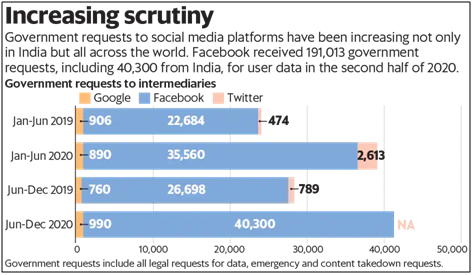 Taking down the whole user account should be a last resort:

Internet and telecommunications system have come a long way since the times when the IT Act was framed in 2000. To keep up with the pace of development the Government came up with the Information Technology (Intermediary Guidelines and Digital Media Ethics Code) Rules, 2021, which, besides bringing about obligations for accountability from social media companies and platforms, went on to add onerous requirements such as traceability of online conversations and new oversight functions that are weighted in the Government’s favour.

No doubt that Twitter is under the unambiguous obligation to comply with Indian laws. But it also has the uncontested right to be heard in a court of law. Twitter filed a writ petition challenging several of the blocking orders. Twitter’s case in the Karnataka High Court could lead to greater scrutiny of the Rules and to a clear legislative debate on how to remake them in a way that they do not impinge on the right to freedom of expression and privacy in the online space.