‘Two-finger test’ of Rape Victims is ‘Patriarchal’ and ‘sexist’: SC

Recently, the Supreme Court (SC) has declared that any person conducting the invasive ‘two-finger’ or vaginal test on rape or sexual assault survivors will be found guilty of misconduct, as checking the virginity of the rape victim or whether she is ‘sexually active’ or not, is irrelevant to the fact whether she was ‘raped’ or not.

What is a Two-Finger Test? 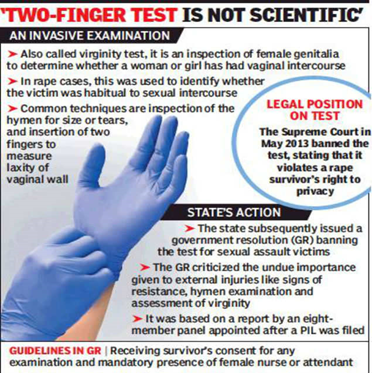 Patriarchal norms in the society for medical examinations of Rape Victims:

What is Supreme Court's take on the issue?