Water Scarcity with reference to India

According to the India Meteorological Department (IMD) data, October 2018, was the driest month for the country since 1976. In fact, the rainfall for the month was even lower than that drought years.

According to the India Meteorological Department (IMD) data, October 2018, was the driest month for the country since 1976. In fact, the rainfall for the month was even lower than that drought years.

Although, the actual deficit last monsoon was modest — barely 10%. But the post-monsoon rainfall (October to December, 2018) has registered a 44% deficit. This national average deficit conceals shortages in some regions where it is much higher. In Marathwada and Vidarbha, the deficit is 84%, and 88% respectively. This low-rain and no-rain situation is going to aggravate the water crisis in India.

IMD Data: At a Glance

2018 was declared the sixth- warmest year since 1901, when recording started. Pointing towards changing weather and climate parameters, IMD also noted that the last monsoon rainfall was the sixth-lowest since 1901.

From IMD’s analysis, it is clear that India is witnessing consistent warmer seasons and pointed out that 11 out of 15 warmest years were in the last 15 years (2002-2018). The last year was also the consecutive third-warmest year after 2016 and 2017.

What is water scarcity?

Water stress: It is relatively a new concept; it is the difficulty of obtaining sources of fresh water for use during a period of time and may result in further depletion and deterioration of available water

Water shortage or deficits: Water shortages may be caused by climate change, such as altered weather patterns including droughts or floods, increased pollution, and increased human demand and over use of water.

Water crisis: A water crisis is a situation where the available potable, unpolluted water within a region is less than that region's demand.

The two main sources of water in India are rainfall and the snowmelt of glaciers in the Himalayas. India has about 20 river basins. It receives an average annual precipitation of 4,000 billion cubic metres (BCM) which is the principle source of fresh water in the country. The total utilisable water resources of the country are assessed as 1086 km3. Thus, India has 2.5 percent of the land mass and 4 percent of the world's water resources but is home to nearly 18 per cent of the world’s population. As India develops and grows to support its 1.3 billion people, the country is on the brink of an inescapable crisis.

In 1951, the per capita water availability was about 5177 m3. This has now reduced to about 1816 cubic metre in 2001 and 1545 m3 in 2011. There is high variation in per capita water availability ranging from 263 cubic metres (CM) in the Sabarmati basin to 2013, 6 CM in Ganga-Brahmaputra-Meghna system. With the country already experiencing water stress, there is need to augment both water supply in water-rich regions lacking infrastructure and manage water demand in water-scarce regions.

According to a report by Niti Aayog:

According to World Bank report climate change impacts are likely to lower the living standards of nearly half of India’s population.

According to the report titled ‘South Asia's Hotspots: Impacts of Temperature and Precipitation Changes on Living Standards’, rising temperatures and erratic rainfall pattern could cost India 2.8 per cent of its GDP. It says that almost half of South Asia, including India, lives in vulnerable areas and will suffer from declining living standards. Approximately 60 crore Indians live in areas where changes in average temperature and precipitation will negatively impact living standards.

India experiences both floods and droughts periodically. Nearly a third of the country’s geographical area is drought-prone whereas 12 per cent of the area is prone to floods. The effect of global warming further intensifies temporal and spatial variations in precipitation, melting of snow and water availability. This emphasises the fact that we need to consume water judiciously. Extensive use of micro-irrigation techniques such as drip and sprinkler irrigation can reduce wastage of water in agriculture sector. Strict monitoring and implementation of laws by the government, NGOs and social activists is also required.

India experiences both floods and droughts periodically. In this context, analyse, the factors causing water scarcity in India. 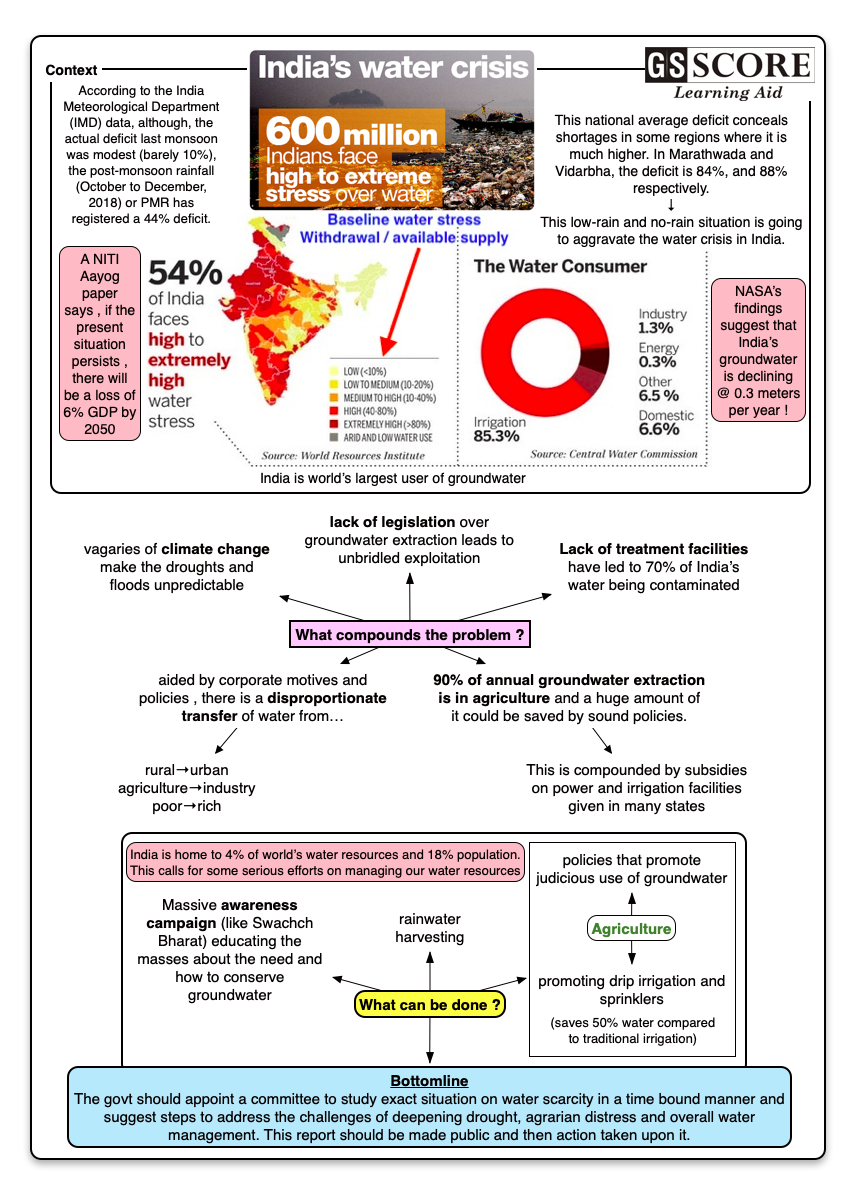