Why are parliamentary standing committees necessary?

Eleven of the 22 Bills introduced in the ongoing session of Parliament have been passed without scrutiny by parliamentary standing committee.

These committees enable detailed consideration of a piece of legislation.

Eleven of the 22 Bills introduced in the ongoing session of Parliament have been passed without scrutiny by parliamentary standing committee.

These committees enable detailed consideration of a piece of legislation.

The article will comprehensively cover nature, type, evolution and efficacy of parliamentary standing committees. It will also deal with the nature of threats perceived on its working.

The Job profile and the structure of a parliamentary standing committee and the Parliament is the same. It is same to the effect that the committees are sometimes referred to as the mini Parliament.

In a parliamentary democracy, Parliament has broadly two functions:

Parliament is the embodiment of the people’s will. Committees are an instrument of Parliament for its own effective functioning.

Committee reports are exhaustive and provide authentic information on matters related to governance.

Bills that are referred to committees are returned to the House with significant value addition. Parliament is not bound by the recommendations of committees

The work done by the Parliament in modern times is not only varied in nature, but considerable in volume. The time at its disposal is limited. It cannot, therefore, give close consideration to all the legislative and other matters that come up before it.

A good deal of its business is, therefore, transacted in Committees of the House, known as Parliamentary Committees.

In India, the earliest Parliamentary Committees were the Public Accounts Committee (1921) followed by the Estimates Committee (1950). In 1993, the current system of Department Related Standing Committees (DRSC) was established replacing subject committees and the structure has largely remained the same till date.

The Standing Committees (DRSC), aligned with specific ministries examine their performance and budgets apart from bills or subjects related to their respective ministries.

The Financial Committees are primarily responsible for scrutinizing the expenditure priorities of the government, suggest measures to improve efficiency in spending and performance of Public Sector Undertakings.

The Select Committee is formed for analyzing a specific legislation/policy and is disbanded after submission of its reports.

The Administrative Committees are primarily responsible for ensuring day-to-day activities of the legislature are planned in consultation with the members.

The chair uses her discretion to refer a matter to a parliamentary committee but this is usually done in consultation with leaders of parties in the House.

Financial control is a critical tool for Parliament’s authority over the executive; hence finance committees are considered to be particularly powerful.

The three financial committees are the Public Accounts Committee, the Estimates Committee and the Committee on Public Undertakings.

Members from both Houses across party lines are represented in most of these committees. Since ministers are part of the executive and legislature is a separate arm to keep a check on the executive, ministers are not a part of any Standing Committees.

What benefits does the committee form bring with it

Issues and challenges in the committee system:

Fewer bills are being referred to it: To strengthen the lawmaking process, it is important that all bills are examined by Standing Committees before passage. This ensures thorough scrutiny of the law.

In India, there is no such rule to ensure all bills are referred to committees. As a convention, the ministry piloting the bill recommends the Speaker to refer a bill to the Standing Committee.

Longer tenure for members: The committee system allows a smaller group of legislators to develop technical expertise on a particular subject and ensure better deliberation.

In the present format, the members are nominated to a Standing Committee for one year. However, shifting of committees every year defeats this purpose.

The vice-president, as chairman of the Rajya Sabha, recently emphasized on the need to extend the tenure of committee members.

Discussion of committee reports: The committees make several recommendations in their reports after thorough analysis and feedback from stakeholders.

Since these are recommendatory in nature, the executive may not necessarily accept them. Moreover, the reports of the committees are not taken up for discussion in Parliament except for references in certain debates on bills.

Several of committee’s recommendations are neither implemented nor discussed

Research Support: Committees examine issues that are technical in nature.  To equip members to gain an in-depth understanding of issues and finally give sound and nuanced recommendations, it is important that quality research is made available to them.

National Commission to Review the Working of the Constitution, 2002 also recommended need for referring all bills to committee, longer tenure for members and strengthening committees with adequate research support.

There are existing practices in other countries that can contribute to strengthening the committee system in India.

Strengthening the committee system can go a long way in improving the quality of laws drafted and minimize potential implementation challenges.

The need of the hour is for greater and effective utilization of Parliamentary Committees to strengthen Parliament as a deliberative body which can ensure effective oversight.

Smaller cohort of lawmakers who are assembled on the basis of the proportional strength of individual parties and interests and expertise of individual lawmakers, could have more open, intensive and better informed discussions.

Committee meetings are ‘closed door’ and members are not bound by party whips, which allows them the latitude for a more meaningful exchange of views as against discussions in full and open Houses where grandstanding and party positions invariably take precedence.

If the government (executives) bypass them, they might get a legislation due to their numerical strength - passed quickly - but this legislation will lack efficacy in the troubled times.

Congress in session is Congress on public exhibition, whilst Congress in its committee- rooms is Congress at work.” - Woodrow Wilson. Comprehensively define nature, type and efficacy of parliamentary committees within the context of them being bypassed by the current government. 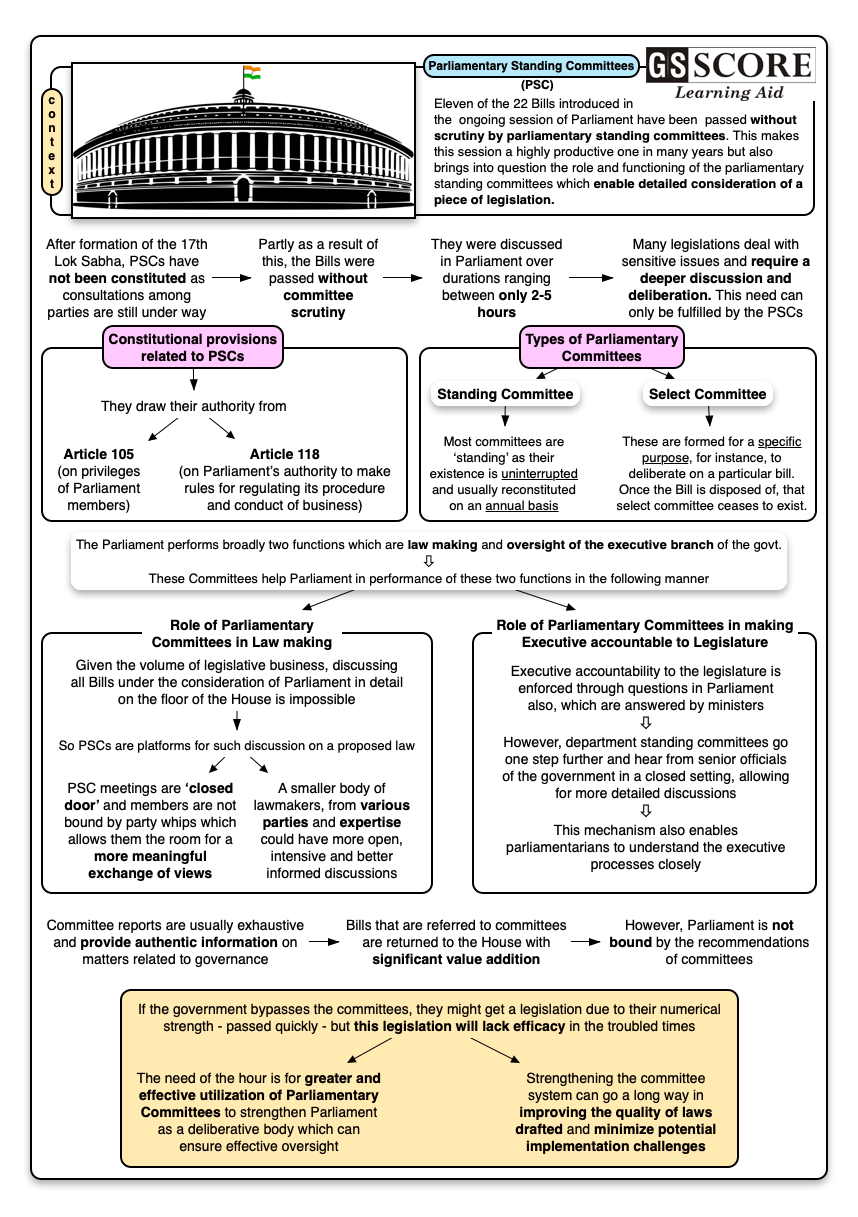