The Ministry of Statistics and Programme Implementation has released the report of a survey titled ‘Health in India’, whose main objective was to gather basic quantitative information on India’s health sector.

How ‘healthy’ is India?

Which religious group is the most prone to illness? 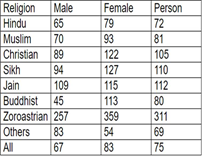