A World Bank report looks at the long-term impact of nitrate exposure experienced during infancy.

A World Bank report looks at the long-term impact of nitrate exposure experienced during infancy. 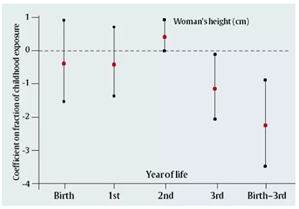 Nitrate is an inorganic compound that occurs under a variety of conditions in the environment, both naturally and synthetically. Nitrate is composed of one atom of nitrogen (N) and three atoms of oxygen (O); the chemical symbol for nitrate is NO3. Nitrite (NO2) can be formed from nitrate by a chemical process called reduction. Nitrate does not normally cause health problems unless it is reduced to nitrite.

Infant Feeding Practices to Minimize Intake of Nitrate and Nitrite

Breast feeding:  Little if any nitrate gets into breast milk, unless the mother is consuming very large quantities of nitrate. Also, bacterial contamination is not a problem when breast milk is consumed directly.

Bottle feeding: Use already diluted liquid formulas or use low-nitrate water to dilute concentrated liquid or powdered formulas. Also, mixed formulas should be kept under refrigeration and used promptly to minimize bacterial reduction of nitrate to nitrite.

Vegetables: Since many vegetables are high in nitrate, their consumption should be limited until an infant is 4-6 months old and their digestive tract has sufficiently matured. Your physician can help you decide when to add new foods. Vegetables should always be prepared while fresh and refrigerated promptly after cooking to minimize bacterial activity.