A new analysis by the Wildlife Conservation Society-India (WCS-India) has shown that Sea cucumbers were the most frequently trafficked marine species in India between 2015 and 2021.

6 What are Sea Cucumbers? 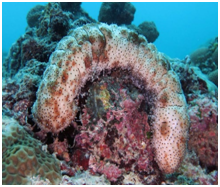 Significance of the species