Ethics is a set of standards that helps guide behaviour, choices and actions of individuals. It is multidimensional as it is governed by the value system of the society including the concept of rights, obligations, fairness, virtues, etc.

Ethics and probity form the cornerstone of the public administration system. In today's world, when the governments are playing an active role in the socioeconomic development of the country, the role of the government functionaries becomes more challenging as they are both the facilitators and enforcers of the law and rules. Responsibility and accountability are integral to ethics. The character of laws and rules through which accountability is enforced is based on the moral ideas of society.

The word 'ethics' is from the original Greek term 'ethikos', meaning 'arising from habit'. Undoubtedly, culture, values, character, the sense of right and wrong are quintessential determinants of ethics. Ethics in public is not limited to the expression of high moral values alone. It also refers to the framework for holding the public functionaries legally accountable for their acts of omission and commission. 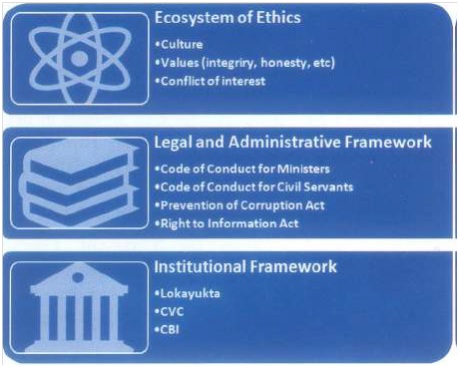 The Government functionaries are part of the society and to that extent are influenced by societal norms. At the same time being part of the governance structure, they have to be more responsible and seen to be above board all the time. There is a strong legal and institutional framework for ensuring probity. It needs to be strengthened and made more effective by nudging people to follow the laws of the land and making punishments for the delinquents very severe.