During the 13th India-Japan summit, on his visit to Japan, PM Narendra Modi engaged with Shinzo Abe on a range of issues including defence and regional security.

During the 13th India-Japan summit, on his visit to Japan, PM Narendra Modi engaged with Shinzo Abe on a range of issues including defence and regional security.

The prominent outcomes of the summit are:

India-Japan Relations: India has the institutional mechanism of an annual bilateral summit with only two countries – Japan and Russia. Besides, PM Modi chose Japan as the first country to visit after being elected as the prime minister. Inter alia, this is an indicator of the upswing in the India-Japan relationship in recent times.

After the Pokhran nuclear tests in 1998, Japan imposed strict sanctions against India. However, India came up with its nuclear doctrine emphasizing a ‘no first use’ policy and maintaining only a minimum nuclear deterrent. This along with changing geopolitical dynamics, especially the rise of a belligerent China led Japan to lift the sanctions in 2001. Since then, regular prime ministerial exchanges have been held and resulted into various landmark agreements and initiatives, such as:

Ties between India and Japan have been building up across all fields, particularly defence and security. This assumes significance in face of Chinese claims in South China Sea and Arunachal Pradesh along with threats from Pakistan and North Korea in the region.

For India, it is imperative to strengthen the bonds of friendship with Japan since the success of India’s “Act-East Policy” largely depends on Japanese participation.

Japan also happens to be one of the biggest investors in India and Tokyo’s financial and technological backing holds the key to building infrastructure in India’s northeast. Traditionally, Japan has been the major economic development partner for most South Asian countries, but Beijing’s expanding influence beyond the South China Sea and across the Indian Ocean region has left Tokyo feeling vulnerable.

The transactional approach of the current USA administration may be seen as an important factor contributing to growing rapport between India and Japan. With an aim to cut a deal with Pyongyang, Washington has been opening up to North Korean regime in recent months. However, this is unlikely to please Japan, which has long-standing concerns about the reckless behaviour of the North Korean dictator.

Given the traditionally sound ties between the two countries coupled with growing strategic convergence between them, Japan finds it useful to elevate India’s position in Japan’s Indo-Pacific strategy.

There is a growing realisation of the significance of the Indo-Pacific region in fast-changing geopolitical landscape of Asia, which has challenged the existing security architecture. The US, Japan and Australia are faced with Chinese assertiveness in the Western Pacific. And in the Indian Ocean, India and the US are faced with an increasing Chinese presence.

Japan seeks to bolster cooperation with many Asian and African countries based on its ‘Free and Open Indo-Pacific Strategy’ aimed at keeping in check the growing maritime assertiveness of China.

Shinzo Abe argued in his 2007 speech in Indian Parliament that if India and Japan came together, the “broader Asia will evolve into an immense network spanning the entirety of the Pacific Ocean, incorporating the United States of America and Australia. Open and transparent, this network will allow people, goods, capital, and knowledge to flow freely.”

It is therefore not surprising that upholding principles such as freedom of navigation and countering threats to Japanese shipping remains fundamental to Japanese foreign policy.

Without any doubt, China is the elephant in the room when it comes to defining close partnership between India and Japan. China’s growing military strength and rising economic power have prompted other democracies, including India and Japan, to sit up and take notice. Amid growing concerns about China’s Belt and Road Initiative (BRI), New Delhi and Tokyo have stepped up their cooperation for creating a viable alternative for infrastructure development and connectivity among countries.

Since bilateral cooperation between India and Japan is closely intertwined with trilateral cooperation with the US, it is but natural for Japan to expect India to play an increasingly active role in the Quadrilateral Security Initiative (referred to as the Quad) while affirming the importance of freedom of navigation and rule of law.

But India remains hesitant on the Quad, which is likely to cause confusion among other three partners – the US, Japan and Australia. It was this confusion which prevented India from allowing Australia to become a part of the Malabar naval exercises.

So far, India has also decided to stay away from a joint initiative launched by the US, Japan and Australia to fund infrastructure projects to counterbalance the BRI in the Indo-Pacific region. India’s participation in this important infrastructure initiative would have reassured the other members of India’s commitment to the grouping.

India’s ‘Act East’ outreach fits well with Japan’s vision for a ‘Free and open Indo-Pacific’. Both countries realise that a strong India is in Japan’s interest, just like a strong Japan is good for India, both economically and geopolitically.

Besides, the significant shift from ‘Asia-Pacific’ to ‘Indo-Pacific’ security arrangements being created by the USA are primarily focussed around India. At a time when India has been identified as a key player across the Indo-Pacific that Japan seeks to actively work with, it is imperative for India to develop a coherent approach on the Indo-Pacific and the Quad.

“Trade and investment have dominated India-Japan relations and now defence and security need to catch up in the emerging geopolitics in the Indo-Pacific region”. Critically examine. 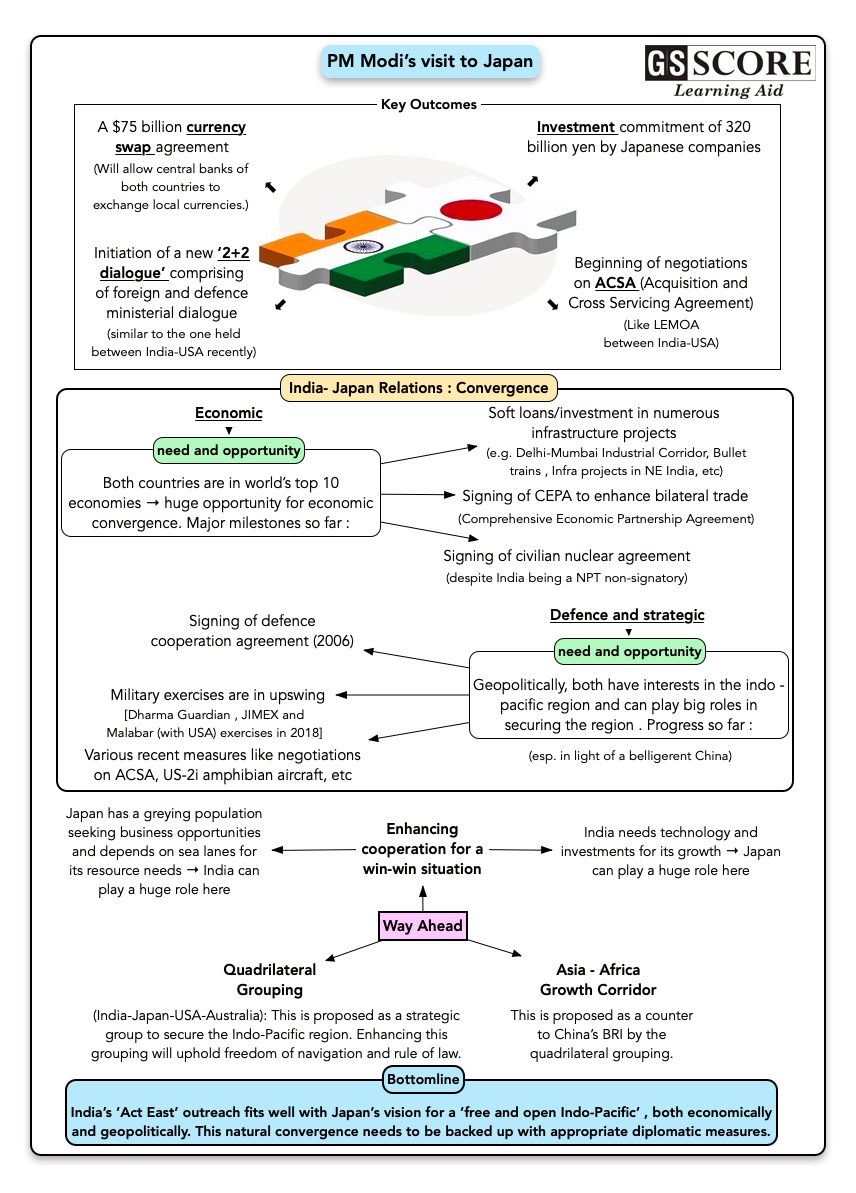