The Supreme Court in its recent verdict scrapped the pre-independence provision of adultery law under section 497 of Indian Penal Code (IPC).

The dominant argument in the court was that the law discriminated the men by not making women equally culpable in an adulterous relationship. However SC upheld the validity of the section 497 by pointing out that neither a man nor a woman can prosecute their disloyal spouses. It is only the ‘outsider’ to the relationship who can be prosecuted and that too by the aggrieved husband alone.

A woman who indulges in extramarital relationship is exempted from the punishment and provided protection under article 15(3) of the constitution. The constitution bench negate the argument that the section 497 is violating the right to equality as enshrined in Article 14 and 15 of the constitution. The bench further said that constitution provides special provisions with regard to protection of women and children. Hence, Article 14 and Article 15 of the Indian Constitution read together validate section 497 of the IPC. The crux of the Abdul Aziz vs. The State of Bombay Supreme court judgement was that the married woman (prey) is the victim and the man (outsider) is “the author of the crime.

Besides the three Supreme Court judgments, there were two more important legal views in connection with adultery law.

The Supreme Court verdict has thrown light on the many issues related to women while scrapping the pre-independence provision of adultery law from the Indian Penal Code.

The crux of the judgement is as follows:

The Supreme Court judgement will be a landmark judgement in providing  women equal footing in social contracts like marriage. The adultery law has for decades became a means to exploit a married woman and inflict many atrocities. It was a means to question and control the sexuality of the woman. It has played an important role in enhancing and consolidating the following notions of exploitations of women:

Laws which were made more than 150 years ago under an alien rule if still prevalent, continue the legacy of colonial structure of the society.  Women in independent India have been protected by special provisions in constitution (article 15(3)); provided right to vote, right to participate in the economic development of the country. All that would be meaningless if she would be subject to the will of their male partners under the fear of laws like adultery.

Section 497 of IPC emanated in such social structure and times in which patriarchy and control over women was rampant. It was a colonial law to control and subjugate women even in social contracts. All the communities in India at that time whether British, Hindu, Muslim etc. regarded sexuality of women as something to be controlled and owned by the male no matter whether inside or outside the marriage. Practices such as kanyadaan, virginity and sexual chastity are created to reinforce the belief that there is a lack of ownership of a woman’s own body as these are by-products of how patriarchy operates for all those who are concerned. It was part of an era in which women were deprived of her political and economic freedoms. She was at the lower ladder of the social hierarchy transcending the caste, class and other barriers.

Although, the adultery law was intended to protect the sanctity of marriage and consolidate patriarchal notions of society, it also became the means of domestic violence. The question mark over the sexuality of women often led men to use acts of physical and mental violence whenever the women transgressed the so called male notions of obedient wife.

The adultery law treated breach of civil contract as criminal offense. It reinforced the notion that the societal norms are far greater good than the personal or individual freedom. The act of adultery was seen not as the product of unhappy marriage but a cause of unhappy marriage. Persons under adultery law were convicted (male by the court) and married woman (by society) for their personal acts of freedom of choice. It was assumed that the choices, likes and dislikes of women after marriage were to be subsumed and subordinated to that of her husband.

The cumulative effect of patriarchal notions of which adultery was an indispensible part impinges the rights of women in almost all her public and private spheres. Adultery law had given a full hand to the male partners to control not only the sexuality of women but also empowered him to determine the counters of social and economic sphere of women. It is not surprising that India is one of the worst performers in terms of women participation in labour force as per the International Labour Organisation. The economic and financial dependence as well as the vulnerabilities of dependence life all emanates and have their roots in the internalized patriarchal customs  and legal institutions of which adultery was one small bolt.

Contextualising the verdict as progressive realisation of rights:

The Supreme Court verdict on adultery law is in sync with its other recent judgements such as Right to Privacy for the progressive realisation of rights.

In NavtejJohar verdict of 2018 SC rendered the section 377 unconstitutional to the extent that it criminalises consensual relationship of any kind between the adults. The Supreme Court highlighted that the section 377 consigned a group of citizens to the margins and was destructive of their identities.  The Adultery law also discriminated women, one of the most marginalised and oppressed groups of the society. So the recent verdict is in tandem with the other judgements of the Supreme Court.

Contextualising the verdict as a means for social good: 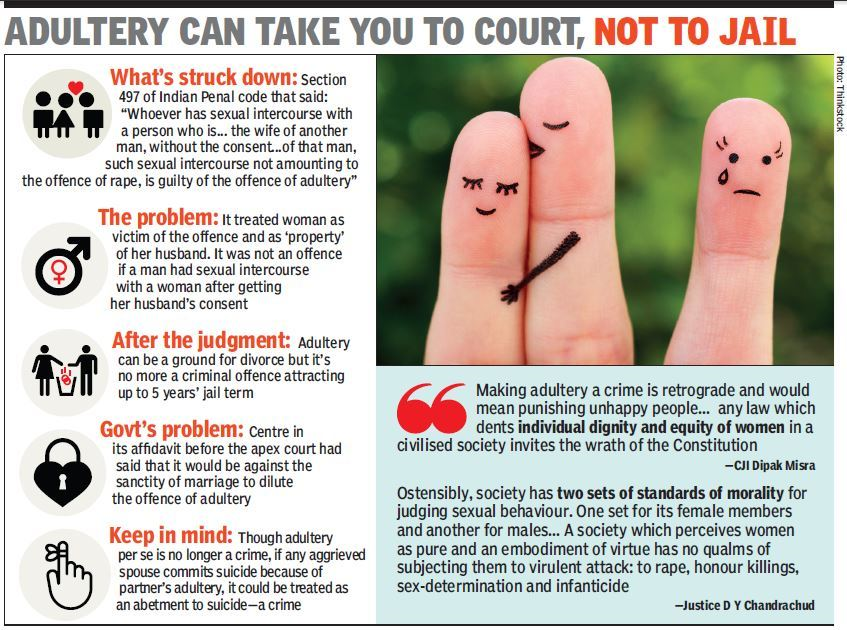 Patriarchy is not only a social construct based on customary laws but has subtle legal and institutional backing in India. Elaborate with respect to recent judgement by Supreme Court on Section 497 of Indian Penal Code (IPC).