Airline sector: downtime and the turnaround

India’s second-biggest airline (Jet airways) by market share posted a standalone net loss of Rs 1,319 crore for April-June compared with a net profit of Rs 55.73 crore a year earlier. Revenue grew 6% to Rs 6,010.46 crore, but the airline failed to control its salary expenses that grew 13% to Rs 816 crore or its finance costs that increased 27% to Rs 249 crore.

Delhi’s Indira Gandhi International Airport, whose redesign was supposed to be sufficient till 2030, has already hit peak capacity of 60 million passengers and even with three runways has massive congestion problems, with aircraft holding in the air for upwards of an hour.

A Delhi-Mumbai flight which used to take just one hour and forty-five minutes from gate to gate a decade ago, can now take two hours fifteen minutes when counting the amount of time planes have to wait on the ground and in the air.

Price elasticity: with more Indians flying and with more flying options, they can look at multiple destinations at the same time on multiple airlines and if the fares do not suit them they can easily cancel their travel plans.

Directorate General of Civil Aviation (DGCA) has made it difficult for the airlines to make ancillary revenues with passengers calling for caps on cancellation charges and calls for caps on excess baggage and other charges.

Consider an example on the matter: Airlines will soon be permitted to offer onboard Wi-Fi, but with costs of installing such systems up to a million dollars per aircraft, can they afford to do so, given that some airlines are believed to have less than a month of cash in hand.

A combination of too many flights, too many airlines and the subsidized Air India adding to the overall woes of the private airlines, things are not looking good for the airlines.

In fact, Air India has already reached to a stage of comatose.

But, even the “bailers” are hard hit:  Tata Group find themselves supporting two airlines right now, Air Asia which has a muddled direction and Vistara which is apparently far from profitable. Jet Airways increasingly looks like it might have a change of management and of strategic direction, especially given that its savior in its last time of crisis, the Abu Dhabi based Etihad Airlines is itself bleeding and some of the other airline groups could pitch in for Jet, especially Air France - KLM Group are also deep in trouble.

What about Low Cost Carriers (LCC)?

The low-cost carriers have to figure out ways to increase ancillary revenues.

But can the “ailing” airline sector adapt to LCC model?

This depends upon consumer preference as LCC are mostly “no-frills” service providers.

What is the solution?

After Kingfisher, Jet airways and Air India are facing meltdown. While certain Low Cost Carriers are performing above the benchmark, the airline sector as a whole is facing downtime. Evaluate the risk faced and importance of the sector and suggest a way forward. 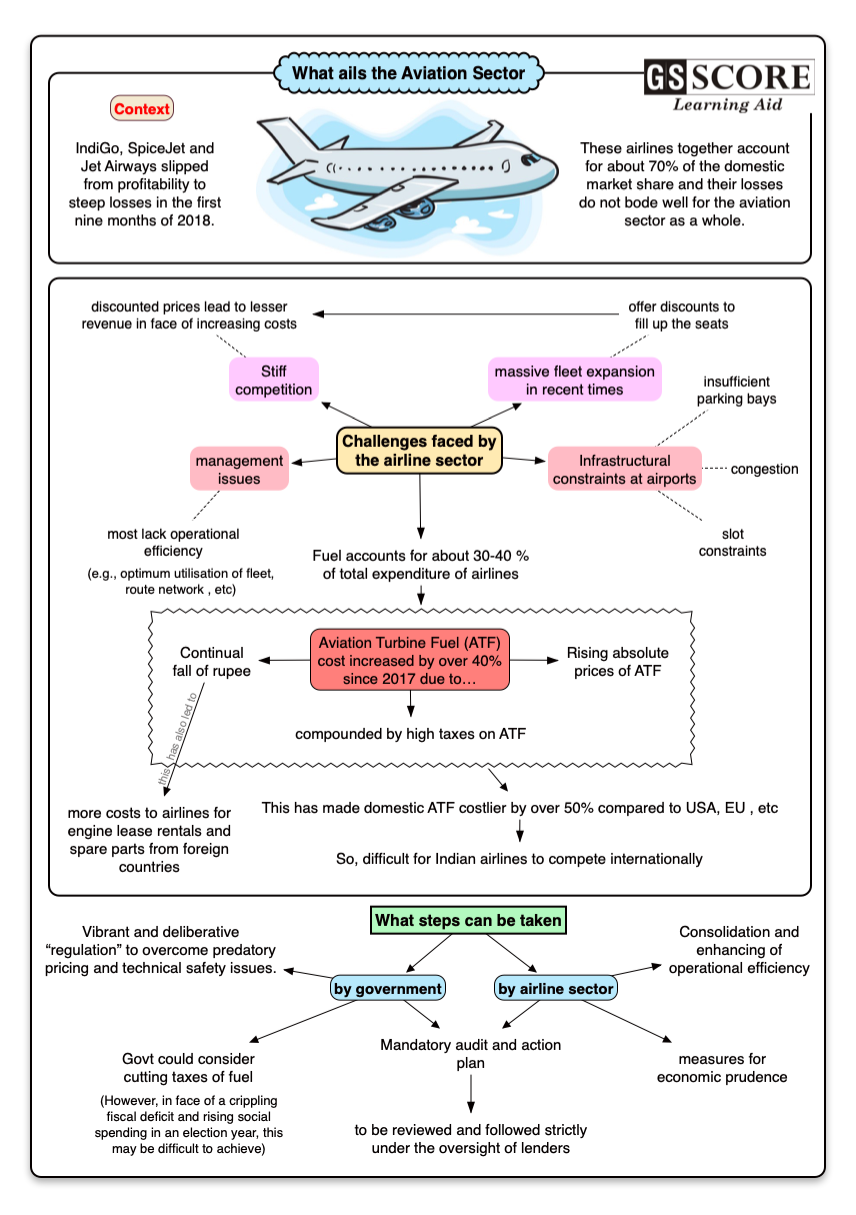