The fourth industrial revolution is conceptualized as an upgrade on the third revolution and is marked by a fusion of technologies straddling the physical, digital and biological worlds. It will mark out as a new phase rather than a prolongation of the current revolution - velocity, scope, and systems impact and lead to the transformation of entire systems of production, management, and governance.

What is 'Fourth Industrial Revolution'?

The fourth industrial revolution is conceptualized as an upgrade on the third revolution and is marked by a fusion of technologies straddling the physical, digital and biological worlds. It will mark out as a new phase rather than a prolongation of the current revolution - velocity, scope, and systems impact and lead to the transformation of entire systems of production, management, and governance. In simple words, the new revolution can be said to be the advent of cyber-physical systems which, while being "reliant on the technologies and infrastructure of the third industrial revolution represent entirely new ways in which technology becomes embedded within societies and even our human bodies".

How will it be different from 3rd revolution?

There are 3 reasons why today's transformations represent not merely a prolongation of the 3rd Industrial Revolution but rather the arrival of a 4th and distinct one: velocity, scope, and systems impact. The speed of current breakthroughs has no historical precedent. When compared with previous industrial revolutions, the 4th is evolving at an exponential rather than a linear pace. Moreover, it is disrupting almost every industry in every country. And the breadth and depth of these changes herald the transformation of entire systems of production, management, and governance.

The Technologies that underpin the 4th Industrial Revolution will have a major impact on businesses. On the supply side, many industries are seeing the introduction of new technologies that create entirely new ways of serving existing needs and significantly disrupt existing industry value chains. It will improve the quality, speed, or price at which value is delivered. It will also lead to major shifts on the demand side are as growing transparency, consumer engagement, and new patterns of consumer behaviour (increasingly built upon access to mobile networks and data) force companies to adapt the way they design, market, and deliver products and services.

It will enable development of technology-enabled platforms that combine both demand and supply to disrupt existing industry structures of sharing or on demand economy. These technology platforms will create entirely new ways of consuming goods and services in the process. It will lower the barriers for businesses and individuals to create wealth, altering the personal and professional environments of workers. The main effects that the 4th Industrial Revolution have on business are-on customer expectations, on product enhancement, on collaborative innovation, and on organizational forms.

New technologies and platforms will increasingly enable citizens to engage with governments, voice their opinions, coordinate their efforts, and even circumvent the supervision of public authorities. Though, the governments will gain new technological powers to increase their control over populations, based on pervasive surveillance systems and the ability to control digital infrastructure. But they will increasingly face pressure to change their current approach to public engagement and policymaking.

The 4th Industrial Revolution will profoundly impact the nature of national and international security, affecting both the probability and the nature of conflict. The advances in technology will create the potential to reduce the scale or impact of violence, through the development of new modes of protection, for example, or greater precision in targeting.

The 4th Industrial Revolution will change not only what people do but also who they are. It will affect identity and all the issues associated with it: sense of privacy, notions of ownership, consumption patterns, the time people devote to work and leisure, and how they develop careers, cultivate skills, meet people, and nurture relationships. Constant connection may deprive people of one of life's most important assets: the time to pause, reflect, and engage in meaningful conversation. 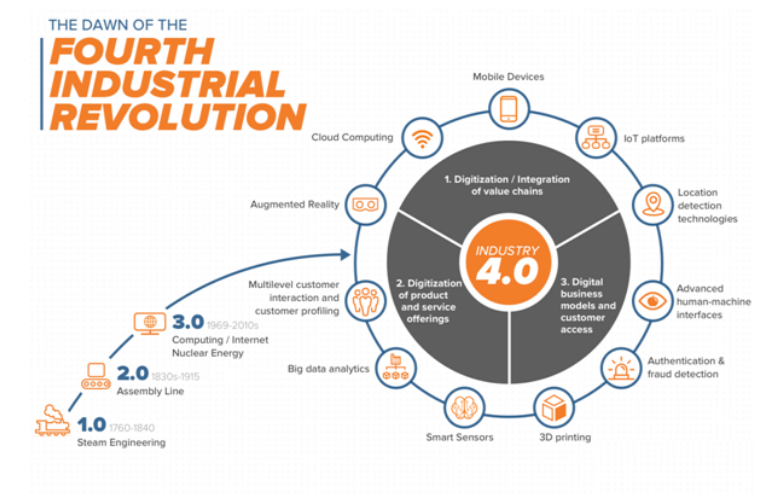 1. The fourth industrial revolution can not only disrupt labour market, but fundamentally alter them. Elaborate.

2. Examine the steps taken by government of India to address the challenges posed by the fourth industrial revolution.