Gender Discrimination in the Corporate Sector

2018 has been about the women-led movements like #Timesup and #Metoo calling out on various forms of gender-based discrimination and sexual misconduct, respectively. The persistent gender pay-gap is one of the harsh realities of the 21st century and has been a grave concern worldwide for over a century now. Although industrialised nations have

2018 has been about the women-led movements like #Timesup and #Metoo calling out on various forms of gender-based discrimination and sexual misconduct, respectively. The persistent gender pay-gap is one of the harsh realities of the 21st century and has been a grave concern worldwide for over a century now. Although industrialised nations have this problem too, but, in case of countries like India, the gender wage disparity is far more worrisome.

2018 began with the International Monetary Fund (IMF) nudging India to ensure gender parity for better GDP growth (27% increase) and ended with the World Economic Forum’s (WEF) annual Gender Gap Index (GGI) pointing out the areas India needs to improve on. India had a rank of 108th on the latter with some areas of improvement like wage equality for similar work and closing of tertiary education gender gap.

Gender based discrimination in the corporate sector:

Gender-based discrimination is any unequal treatment based on gender and refers to a situation wherein a person is denied opportunity solely on the basis of their gender.

Women population constitutes almost half (48.18%) of the country’s population. Women play a very important role in country’s development yet the women population in India is characterized by low literacy rate (65.46%) and female labour participation rate (FLPR) of 25.51%. Studies, also, show that only two-thirds of women graduates are employed. A very few companies have women at the helm and even fewer women-led start-ups are being promoted and funded.

Large majority of women across the spectrum have started speaking out against the discrimination including the wage pay-gaps and demanding equality, including the leading actresses from both Hollywood and Bollywood.

Lack of proper grievance redressal mechanism for female workers to register their complaints and get them redressed properly. Often, there are biased enquiries and unfair and wrongful dismissal of women who speak up against the discrimination.

In India, despite the law being in place for appointing an Internal Complaints Committee under the Women at Workplace (prevention, prohibition and redressal) Act, 2013, there are many companies without such a committee in place; who have it, are in a dysfunctional state.

Reasons for the discrimination:

Discrimination is against the basic human law of equality and humanity which seeks to treat a fellow human as inferior and second-class citizens .The most fundamental moral principle of civilised societies i.e. equality, which forms the basis of Article 1 of the Universal Declaration of Human Rights (UDHR).

Gender-based discrimination is a serious form of injustice and is based on ill-founded logic which have no authentic proof, whatsoever, and is largely an attitudinal issue.

Widespread discrimination can lead to intolerance and conflict in the society. Discrimination at workplace results in breeding of ill feelings at work, and reduced productivity.

Factors which make women better suited to the leadership roles:

Studies have shown that women have more patience and high emotional quotient so they are well-suited for the leadership role as they are able to better communicate and handle the work-relations. Women are also good at management and have better sense of ethics.

There are a number of successful women corporate leaders like Ela Bhatt, Indira Nooyi, Arundhati Roy, etc. who have time and again proved the naysayers wrong when it comes to proving the mettle of women-power.

How to improve the situation?

The attitudinal issue associated with patriarchy can only be tackled with the socialisation process in which education plays a major role. Education increases the awareness among the population regarding their rights and gives them opportunity for becoming economically independent which increases their status in society, their confidence, and gives them voice. For example, in urban areas women are getting education and thus are becoming more and more aware of their rights and thus the disparity has, somehow, shown a declining trend. But the literacy rate and awareness is low among rural women.

The importance of change-agents and role models, also, become important to break the notional problems surrounding the working women.

The role of media including social media, in promoting the positive stories about the working women giving impetus to the womenfolk is also very crucial. Social media also provides a voice to the women which was hitherto not available to her. The recent movements like #Timesup and #Metoo have shown the decisive role social media can play in garnering support and solidarity for the causes of women.

Thus, increasing participation levels of women in the various arenas, like paid labour market activities which bridges the hiatus in the crucial sphere of economic involvement, is important for improving the overall status of women in society.

Analyse, how gender parity is positive for the development of country. Also discuss the initiatives taken by government to bridge the wide gender pay gap in India. 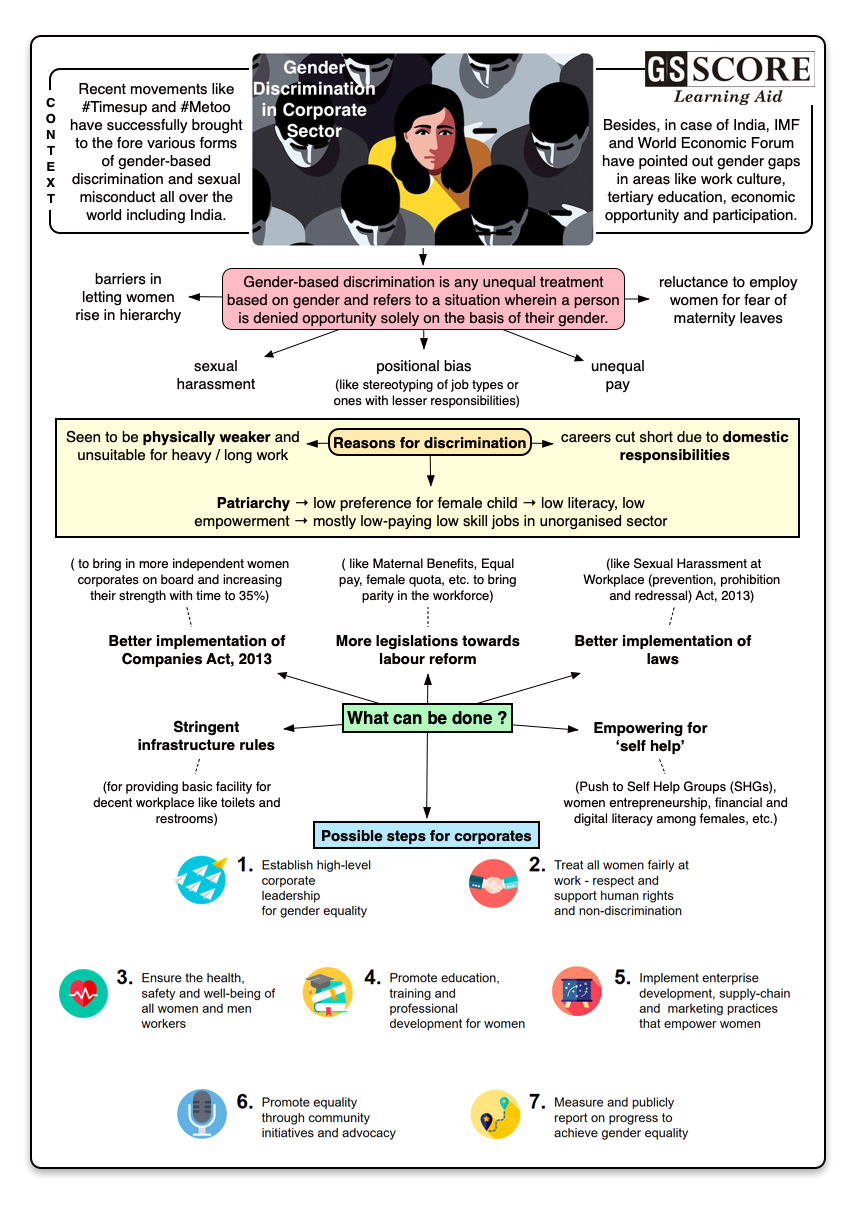