India's demography at crossroads: elderly may outnumber the youth

Ministry of Statistics and Programme Implementation has released ‘Youth in India 2022’ report.

Key Highlights of the ‘Youth in India 2022’ report: 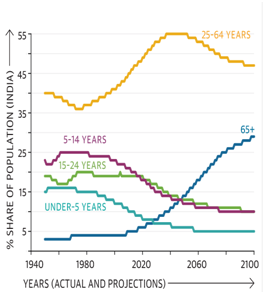 What are the major concerns highlighted in the Youth India Report 2022?

What are the major issues with India’s population?

What measures can be taken?