In the last few years, Indian government is seen to make the change from playing big brother in the neighbourhood to a more genial and avuncular version of its previous self.

In the last few years, Indian government is seen to make the change from playing big brother in the neighbourhood to a more genial and avuncular version of its previous self.

Almost four years after Prime Minister Narendra Modi began his term with a “Neighbourhood First” moment, by inviting leaders of all South Asian Association for Regional Cooperation (SAARC) countries to his swearing-in ceremony, India’s neighbourhood policy is clearly adrift. New Delhi’s connect with its South Asian neighbours is weaker than it has been for a very long time.

It is argued that India is sliding towards a situation where it is neither feared nor loved by other South Asian countries.

One reason is certainly the backlash it received from some of its smallest neighbours like Nepal and the Maldives, that didn’t take kindly to being strong-armed, even if New Delhi projected its advice to be in their best interests.

Another could be the conscious rolling back of India’s previous policy of dissuading neighbours from Chinese engagement to now standing back as they learn the risks of debt-traps and over-construction of infrastructure on their own. India’s own rapprochement with China post-Wuhan in the spirit of channelling both “cooperation and competition together” has also led to this outcome.

How has it changed?

Nepal: With Nepal, the government’s moves were a clear turn-around from the ‘tough love’ policy since the 2015 blockade. Then, the government seemed to want nothing more than to usher Prime Minister K.P. Sharma Oli out of power. In 2018, however, when Mr. Oli was re-elected, despite his anti-India campaign, the Modi government wasted no time in reaching out and, in a highly unconventional move, despatched External Affairs Minister Sushma Swaraj to Kathmandu even before Mr. Oli had been invited to form the government. Since then, Mr. Oli has been invited to Delhi and Mr. Modi has made two visits to Nepal, with a third one planned in December to be part of the “Vivaha Panchami” festival. The frequency of visits in 2018 is in stark contrast to the three preceding years, when Mr. Modi did not visit Nepal at all.

Maldives: Similar comparisons abound with India’s reaction to major developments in the neighbourhood. In the Maldives, when emergency was declared by the previous regime of Abdulla Yameen, New Delhi made no attempt to threaten him militarily despite expectations of domestic commentators and Western diplomats. When Mr. Yameen went further, denying visas to thousands of Indian job seekers and naval and military personnel stationed there, New Delhi’s response was to say that every country has a right to decide its visa policy.

Bangladesh: With elections in Bhutan (completed) and Bangladesh (to be held in December), as well as the ongoing political crisis in Sri Lanka, India has chosen to make no public political statement that could be construed as interference or preference for one side over the other. Earlier this year, the government even allowed a delegation of the Bangladesh opposition to visit Delhi and speak at Bharatiya Janata Party (BJP)-affiliated think tanks, although it later deported a British QC lawyer for the Bangladesh Nationalist Party.

Afghanistan: Perhaps the biggest policy shift this year was carried out as a concession to the Ashraf Ghani government in Kabul. After a policy of more than two decades of refusing to engage with the Taliban, or even sit at the table with them, in November India sent envoys to the Moscow conference on Afghanistan, where the Taliban’s representatives were present. The U.S. chose to send a diplomat based in Moscow as an “observer”, but the Indian delegation of former Ambassadors to the region represented non-official “participation” at the event. The shift was palpable. Earlier, the government had stayed aloof from the process, explaining that any meeting outside Afghanistan crossed the redline on an “Afghan-owned and Afghan-led solution”. While the change in position was eventually achieved by a high-level outreach by the Russian government, which has projected the conference as a big diplomatic success, India’s participation had been nudged by President Ghani himself. He had made a strong pitch for backing talks with the Taliban during a visit to Delhi in mid-September. Both in his meeting with Mr. Modi and in a public speech, Mr. Ghani had stressed that the Islamic State and “foreign terrorists” were the problem in Afghanistan, as opposed to the Afghan Taliban itself, and talks with them had the support of the Afghan people. Whatever India’s reservations may have been about the Taliban, the Modi government eventually decided to extend its participation to the Moscow event.

Pakistan: The government’s latest shift can be possibly seen, in sending two Union Ministers to Pakistan to join Prime Minister Imran Khan for the ground-breaking ceremony for the Kartarpur corridor, as part of the larger pattern of softening towards the neighbourhood. No Indian Minister has visited Pakistan since the Uri attack in September 2016, and after the cancellation of Foreign Minister talks at the UN this year, it was assumed that the government would not pursue conciliatory proposals with the new government in Islamabad. It is also significant that the BJP and the Prime Minister have chosen not to make Pakistan an electoral issue in the current round of State elections, as they did during last year’s Assembly polls. While it seems unlikely that the larger shift required for a Prime Ministerial visit to Pakistan for the SAARC summit is possible before elections next year, it is not inconceivable that people-to-people ties, of the kind Mr. Modi spoke of in his speech comparing the transformative potential of the Kartarpur corridor to the falling of the Berlin wall, will be allowed to grow.

There is a growing consensus that India is sliding towards a situation where it is neither feared nor loved by other South Asian countries. Critically examine. 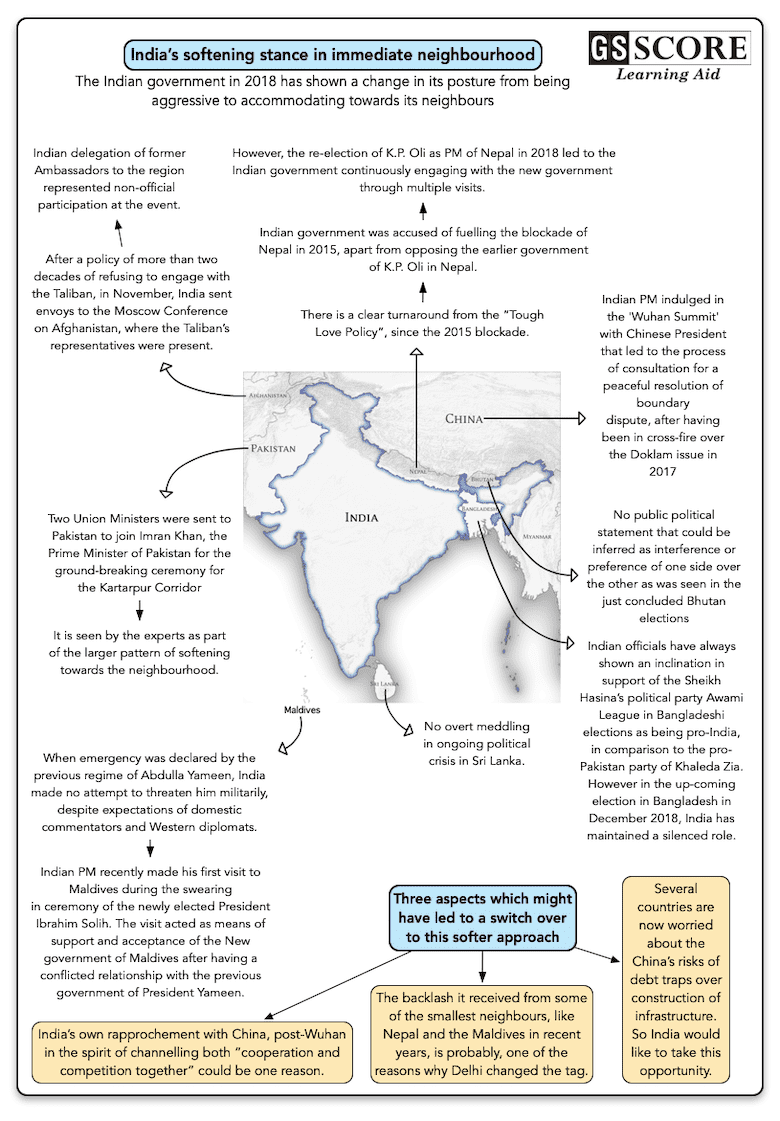