It is being said that social media is mainly responsible for the violent, regressive society of 2018. Social media was used to garner support for a man who burnt a Muslim man on video in Rajasthan.

It was also used to raise funds for the parents of a child who was gang-raped and murdered in Kathua in Jammu and Kashmir.

The presence of social media in our lives is highly complicated. While the birth of social media is based on the democratic principles of the Internet and its technological ability to be open and accessible to all, it has evolved to not only be inclusive and participative but also disruptive. The features of openness, obscurity and anonymity that once gave strength to marginalised communities are now giving room for malicious intentions to grow.

As we approach the end of the second decade of this century, social media and the Internet have drifted from their promise of closing distances and exposing us to the views of those who existed beyond our personal networks. We haven’t only become consumers of information but creators as well, which gives us a misplaced sense of control. However, it is now increasingly being blamed for breeding toxicity, promoting polarisation, amplifying disinformation, birthing malicious intentions and swaying elections.

What is Social Media?

It is a computer-based technology that facilitates the sharing of ideas and information and the building of virtual networks and communities. By design, social media is internet based and offers users easy electronic communication of personal information and other content, such as videos and photos. Users engage with social media via computer, tablet or smartphone via web-based software or web application, often utilizing it for messaging.

Individuals- To keep in touch with friends and extended family, network for career opportunities, find people from all over the globe who share a common interest, share content and more.

Businesses- It is an indispensable tool for finding and engaging with customers, sales, advertising and promotion, gauging trends and offering customer service.

Governments and politicians-To engage with constituents and voters.

How much time do we spend on Social Media?

In India, social media platforms have reached over 200 million people which makes India the second most populated country on the Internet, paradoxically, India also has the highest number of unconnected individuals since only about 30% of the country’s population has experienced the Internet so far. India is now WhatsApp’s biggest market, with approximately 250 million monthly users.

As a positive force:

It has enabled millions of people and communities to access their rights and voice their opinions.  It has given thousands of artists an opportunity to showcase their art to a global audience, and given a platform to hundreds for news and other content. It has even provided citizens and governments a platform where they can engage in dialogue.

Social media sites are more than willing to play abettors. Twitter, for example, will routinely prompt you to follow people who hold a viewpoint that is similar to yours. Social media creates and services needs, which could be the narcissistic impulses encouraged by Instagram or the strengthening of deep-rooted biases on Twitter and Facebook.

As per a study carried out by Aalto University, Finland, on increasing polarisation on social media found that factors like user homophily (users in a social system tend to bond more with ones who are similar to them than to ones who are dissimilar) and algorithmic filtering have created this cycle of enforcing and reinforcing belief systems and ensuring that we don’t open our minds to diverse opinions. The study suggests that algorithms must be created to identify trigger topics and find diverse opinions that might otherwise be kept out.

Despite all its evils, social media is a tool for expression, equality and empowerment, especially for a country like India where 70% of the population is yet to get online and leverage the opportunities it has to offer. While social media is definitely facing the global challenges of information bombardment (both factual and fake), it is also enabling communities to access their rights and voice their opinion. Hopefully, in times to come, people will learn to take more responsibility for what they share and social media platforms will regain their lost trust.

Discuss the Impact of Digital/Social media on Society. Is social media polarising society? 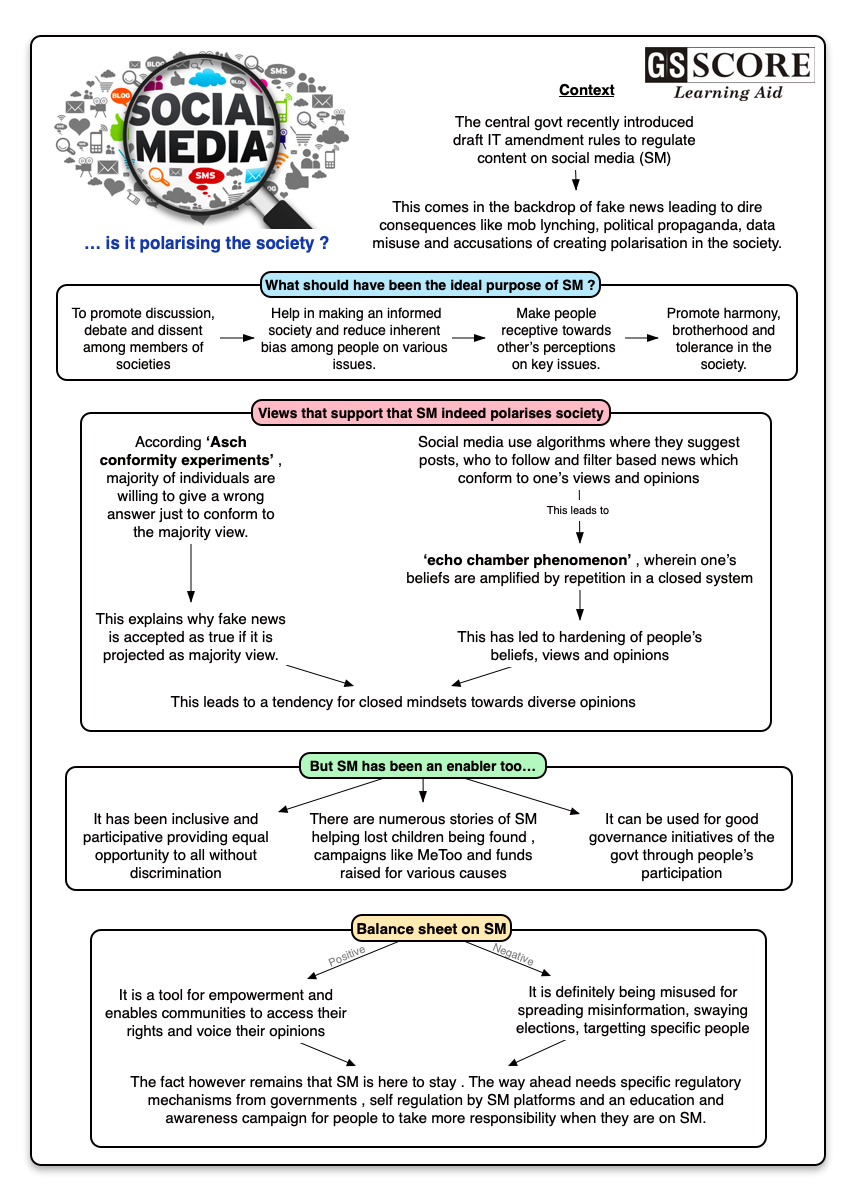