Reservation in promotions for SCs and STs

Reservation in promotion for ST/SC had been in operation since 1955 till 1992.  In Indra Sawhney Case (1992), Supreme Court held it unconstitutional, stating that the reservation policy cannot be extended to promotions.

This year, law was amended to allow reservation in promotions. Through 77th constitutional amendment act, Clause 4A was inserted in Article 16 which restored provisions of reservations in promotions.

Through the 85th constitutional amendment act, 2001, ‘Consequential seniority’ in case of promotion by the virtue of reservation for the government servants belonging to the SCs and STs, was restored with retrospective effect from June 1995.

As per the M Nagraj verdict, concept of creamy layer was not to be applied for STs and SCs promotions in government jobs.  This has been in line with the earlier two verdicts of Indra Sawhney & others Vs. Union of India (1992) and E V Chinnaiah vs. State of Andhra Pradesh (2005).

Constitutional Amendment Bill (117): In 2012, the bill providing reservation in promotions on government posts to SCs and STs was passed in Rajya Sabha. The bill, however, lapsed and could not be passed in Lok Sabha due to differences among political parties.

The original draft of the 117th Constitutional Amendment Bill sought to amend Article 16(4A) to influence the Constitutional discourse on three critical aspects of the debate on quotas in promotions- determining the backwardness of SCs/STs beneficiaries; impact on efficiency; and empirical data to establish the lack of representation of the SCs/STs in promotion posts.

An appeal was made by the Centre in Supreme Court against quashing of reservation by various High Courts. The Court had directed to maintain status quo.

A parliamentary panel had directed the Centre to expeditiously pass the bill to safeguard the interests of SCs and STs in government services.

Delhi High court quashed government’s order of extending reservation in promotion to employees belonging to the STs and SCs beyond five years from November 16, 1992.

Arguments in favour of reservation:

Verdict in a nutshell: 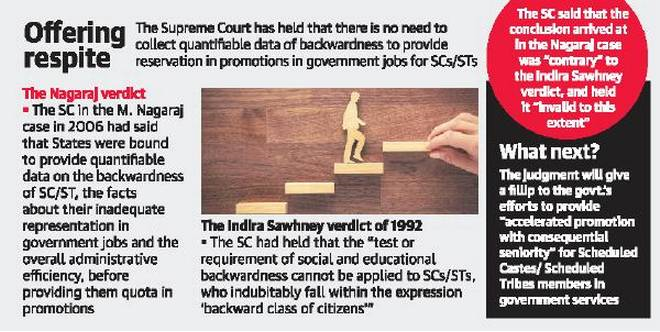 Reservation in promotions for SCs and STs in government services is to bring un-equals at par with equals? Substantiate the view in the light of recent Supreme Court judgement.