The controversial deal between the Indian Department of Space’s commercial entity Antrix and Bengaluru-based start-up Devas Multimedia has been under the scanner for more than a decade now. The recent judgment bolsters the Union of India’s case against Devas internationally, especially against the arbitration award for Devas that is under consideration with the judiciary of the Netherlands. 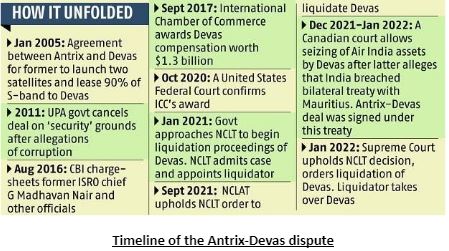 Reasons for the government sighted for the scrapping of the deal:

What did DEVAS do?

Why are AAI and Air India being targeted?

Jurisdiction of Canadian court related to the attachment of Indian assets:

Key observation from Supreme Court’s Judgement, that India will be putting forth to supports its arguments:

The Supreme Court’s recent judgment can be seen in favour of the Union of India and it strengthens its case against Devas in global arbitration, especially against the arbitration award for Devas that is under consideration with the judiciary of the Netherlands. If India succeeds in defending its point in global arbitration, it also means that it will be saving on taxpayers money too as the Devas shareholders are pursuing Indian assets abroad to recover $1.29 billion that international arbitration tribunals awarded over the satellite contract that was cancelled in 2011.