Taking off from CoP26: Is Green Grids Initiative the way forward for India?

This brief aims to analyse the challenges and opportunities in implementing this initiative.

Evolution of OSOWOG into GGI-OSOWOG

Green Grids Initiative was a program of the United Kindom (UK).

The United Kingdom and India agreed to combine forces of the Green Grids Initiative and the One Sun One World One Grid initiative and jointly launch GGI-OSOWOG at the COP26 summit being hosted by the UK at Glasgow in November 2021. 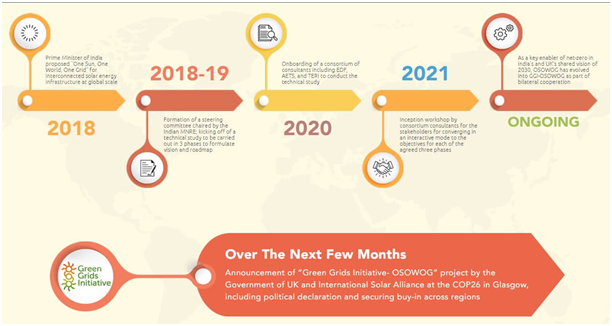 This project aspires to harness the sun’s energy and build a global interconnected electricity grid to accelerate the transition to renewable energy.

The development of the grids will take place in three stages:

The initiative is expected to connect more than 80 countries across a large geographical area, with varying levels of sunlight. A transitional system will enable countries with low levels of sunlight to obtain energy from areas with an excess of it.

As distributed renewable energy sources such as solar PV and energy storage penetrate deep into the Indian electricity sector, it is necessary to prepare for managing the waste generated from these technologies. In addition to being environmentally benign, the 'reduce, reuse, and recover' approach offers multiple socio-economic co-benefits. The local manufacturing industry will benefit from decreased dependence on the import of raw materials. It is imperative for the government to introduce a holistic policy framework for handling the waste from clean energy technologies, highlighting the responsibility of different stakeholders, and creating an enabling environment to implement the same.