The case of legal marriage age for women in India

The Union Cabinet passed a proposal to raise the legal age of marriage for women from 18 to 21 years — the same as men.

What is the current law that defines legal marriage age of women?

What are the reasons for early age marriages?

How does early marriage impact the ‘Women’?

Legal marriage age for women across the globe 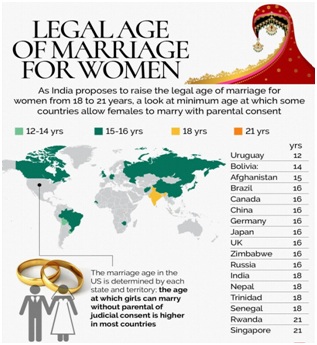 In most parts of the world, child marriage was predominant before the industrial revolution. People used to marry their daughters immediately after they reach puberty. Although it has changed, different marriage ages have been set in countries across the globe.

Can raising marriage age end up backfiring instead?

The idea of a legal fix to postpone girls' marriage might not be a good way to discourage early marriage or improve maternal health and might end up backfiring instead.

What other measures are required?

Following the Cabinet’s approval, the Government will introduce an amendment to the Prohibition of Child Marriage Act, 2006, and consequently bring amendments to the Special Marriage Act and personal laws such as the Hindu Marriage Act, 1955.

However, delaying women’s marriage age is not going to happen on papers. It will invariably require changing the norms underpinning the practice of early marriage and also the low status accorded to women in society.