Prime Minister Narendra Modi inaugurated the first ever undersea optical fibre cable project for Andaman and Nicobar Islands which will provide high speed broadband connections in the union territory at par with services in the mainland. 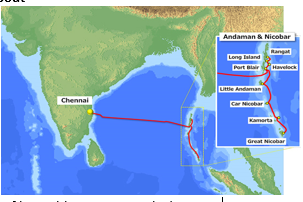 What is Submarine Communication cable?

Why Andaman and Nicobar islands?

Significance of the development