Single-use plastic is a major cause of concern for the world today. India has taken several initiatives to tackle the problem caused by single use plastic and management of plastic waste. Recently Vice President of India, in one of his addresses has spoken about the need to go ahead and influence the human behavior as far as tackling the menace of single-use plastic. He says the focus has to be on bringing those behavioral changes in dealing with the problem of plastic pollution. In this episode, we will discuss and analyze the challenges and solutions for this problem.

Edited Excerpts from the debate

How big is the problem of single-use plastic?

Why single plastic is harmful?

The other side of the coin

Why plastic is important?

How to deal with this problem?

Rather than a sudden blanket ban, phasing out single-use plastic according to whether these are high priority items that need to be replaced immediately and for which alternatives are available, and those that require more time to be phased out. Industry should also be pushed to work on R&D to work on packaging alternatives and to phase out different types of plastic.

Otherwise, humans need to get ready to live in a world where plastic will be present in food, water and even bodies.

What is single-use plastic? 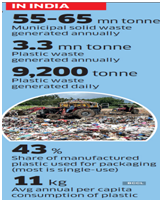 Government effort to deal with plastic