The increasing access to affordable data service has given rise to these faceless evil worldwide - young children, in particular teenagers, being the most vulnerable victims. One in every three young people has reported to be a victim of cyber bullying, according to a survey conducted by UNICEF in as many as 30 countries. The poll found that nearly one in five parents worldwide said their child had experienced cyber bullying at least once. And, according to a majority of respondents, social networks including Facebook, Instagram, Snapchat and Twitter are the most commonplace sites on which cyber bullying occurs.

The problem is particularly bad in India which had the highest rate of parents confirming instances of cyber bullying. A total of 37% of parents across India said their child was bullied online, 14% among them said the bullying occurred on a regular basis. Studies show cyber bullying can cause profound harm as it can quickly reach a wide audience, and can remain accessible online indefinitely, virtually following its victims online for life.

Edited excerpts from the Debate:

Question: What is cyber bullying and how it is prevalent in world?

The most common places where cyber bullying occurs are:

Most of the cases of cyber bullying could be categorized in two main parts: 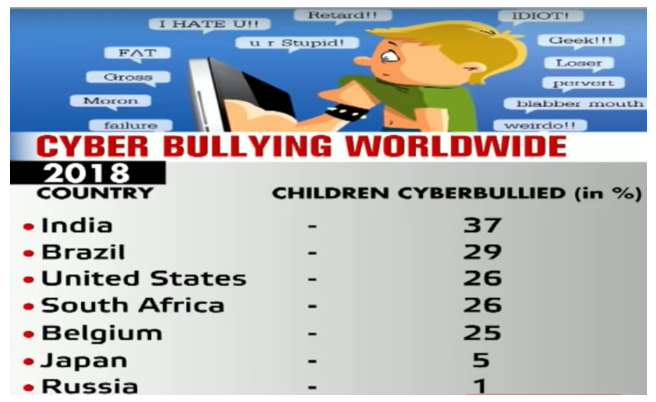 Question: What are the cyber bullying cases and how do the police tackle them?

Question: Do any of law in India explicitly define cyber bullying?

The term cyber bullying is neither mentioned in the Information Technology act 2000 nor in the Protection of Children from Sexual Offences (POCSO) Act, 2012. But there are certain provisions that tackle the problem of the same kind as that of cyber bullying

These all are punishable offences up to 3 years imprisonment and fine. 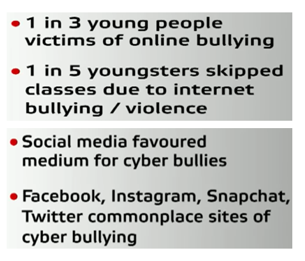 Question: What are the challenges/concerns?

Question: What are the government initiatives?

Question: What should be done?

The cyber bullying is far more rampant and serious than we make out to be. The answer to online bullying and trolling is not to troll perpetrator because it will lead to vicious cycle. So we need to teach our children to stand up to bullying. But that does not mean flooding the wall of bullying with much more hate. It is the responsibility of society to report and prevent cyber bullying.