Human Trafficking has emerged as a significant problem all across the world. It is a crime wherein victims are bought and sold for their exploitation. The World Day against Trafficking in Persons is observed every year on 30th July.

In 2010 UN General Assembly had adopted the Global Plan of Action to Combat Trafficking in Persons to encourage the international community to take action against this henious crime. According to the Global report on trafficking in persons released by UN office on Drugs and Crime countries are now detecting and reporting more victims and at the same time convicting more traffickers . This report also says that most vulnerable individuals are women and girls with majority of victims being trafficked for sexual exploitation and 35 percent of those trafficked for forced labour being female.

Human trafficking is prohibited in India under Article 23 (1) of the Constitution and Immoral Traffic (Prevention) Act 1956 is the premier legislation to deal with this issue.  Govt is now planning to reintroduce a comprehensive bill to check human trafficking. The Trafficking of Persons (Prevention, Protection and Rehabilitation) Bill, 2018 was passed by the lower house last year but has now lapsed after dissolution of 16th Lok Sabha.

What is Human Trafficking?

EDITED EXCERPTS FROM THE DEBATE

Question - What is severity of the problem of Human Trafficking at the global as well as National Level?

Problem of Human Trafficking in India 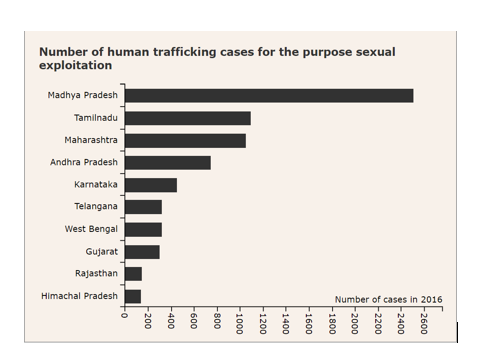 What we have been doing to address the problem and how successful we are in our endeavour?

Despite so many initiatives, why this problem is still so prevalent in India?