Global oil prices surged the most on record after a strike on a Saudi Arabian oil facility removed about 5% of global supplies, an attack the US has blamed on Iran. In an extraordinary start to trading, Brent futures jumped almost $12 a barrel in the seconds after the open on Monday, the biggest intraday advance in dollar terms since they were launched in 1988. State energy producer Saudi Aramco lost about 5.7 million barrels per day of output on Saturday after 10 unmanned aerial vehicles struck the world’s biggest crude-processing facility in Ab-qaiq and the kingdom’s second-biggest oil field in Khurais. Meanwhile, The United States has issued satellite images and cited intelligence to back its claim that Iran was behind attacks on the oil facilities. Iran denies involvement in the air attacks, which were claimed by Iran-aligned Houthi rebels in Yemen.

Edited excerpts from the Debate 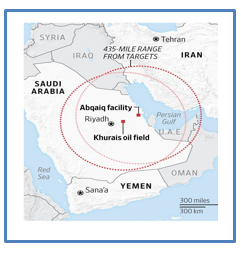 Question: What is the significance of Saudi Arabia in world’s oil market?

Question: How extensive is the latest attack and what are its major impacts?

Question: What is the geopolitics over the attack?

Question: What is India’s oil status?

Question: What are the major Concerns to India?

Question: Describe the impact of recent drone attack on Saudi Arabia’s oil facilities over India. What India should do to fulfil its oil requirements?