The Criminal Procedure (Identification) Act 2022 has come into force after being passed by Parliament in April 2022.

Need for Replacement of the Previous Act:

87th Report of the Law Commission of India 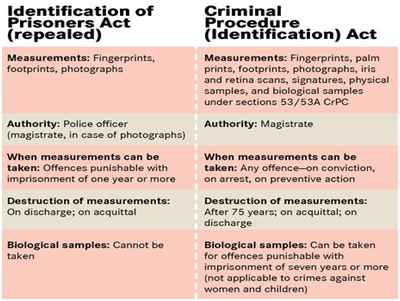 Significance of the Act:

In the absence of strong data protection law, there are considerable concerns over the privacy and safety of data collected by the authorities. The procedure involving the collection, storage and destruction of vital details of an individual must only be done only after placing stringent punishment for breaches. The long-term storage of data should be covered under stringent data protection laws. At the same time depriving law enforcement agencies of the use of the latest technologies would be a grave injustice to victims of crimes.

In the formulation of any law, a balance has to be struck between the rights of an individual and the imperative need in the interests of society for the protection and punishment of crime.