Naga Peace Accord: Dilemma for the Rest of India’s northeast

The NSCN (IM), the largest Naga group, is unwilling to sign an accord with the Centre without a separate Naga flag and constitution.

‘Naga’ is a generic term which refers to a group of over 30 tribes inhabiting not only the boundaries along and within Nagaland, but also some hilly regions of the adjoining states of Assam, Manipur and Arunachal Pradesh, and some parts of the bordering nation, Myanmar.

Due to this kind of resurgence the Naga insurgency is referred as the mother of all insurgencies in the north-eastern states.

Why the complexities of the Nagaland problem have kept peace at bay for a long time?

Main challenges to the Naga Naga Peace accord 2015: 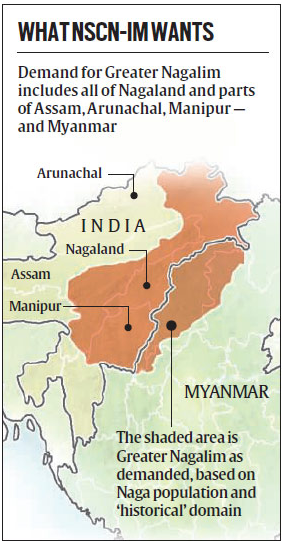 What should be the government’s Policy Prescription and Action Plan?