Prime Minister will visit the U.S. during which he will address the annual U.N. General Assembly session and have a series of bilateral and multilateral engagements in New York

Prime Minister will visit the U.S. during which he will address the annual U.N. General Assembly session and have a series of bilateral and multilateral engagements in New York.

Challenges/Obstacles in the bilateral relations

Intellectual Property (IP): The two sides differ on how to balance IP protection to incentivize innovation and support other policy goals, such as access to medicines. India’s IP regime remains a top concern for the United States, which designated India again on its “Special 301” Priority Watch List, based on such concerns as its treatment of patents, infringement rates, and protection of trade secret.

Agriculture: Sanitary and phytosanitary (SPS) barriers in India limit U.S. agricultural exports - The United States questions the scientific and risk-based justifications of such barriers. An ongoing issue is India’s purported compliance with a WTO decision against its ban on U.S. poultry imports and live swine due to avian influenza concerns; the WTO held that India’s measures violated WTO SPS rules. Each side also sees the other’s agricultural support programs as market-distorting; India’s view of its programs from a food security lens complicates matters.

Localization Trade Barriers: The United States continues to press India on its “forced” localization practices. Initiatives to grow India’s manufacturing base and support jobs include requirements for in-country data storage and local content for government procurement in some sectors.

Services: The United States and India are competitive in certain services industries. Barriers to U.S. firms’ market access include India’s limits on foreign ownership and local presence requirements. For India, a key issue is U.S. temporary visa policies, which affect Indian nationals working in the United States. India is challenging U.S. fees for worker visas in the WTO, and monitoring potential U.S. action to revise the H-1B (professional worker) visa program. India also continues to seek a “totalization agreement” to coordinate social security protection for workers who split their careers between the two countries. The U.S. can be faulted for not seeing the bigger picture. It’s China that’s distorting the global playing field, and U.S. trade policy should be focused on finding and building alliances with countries such as India to combat that larger problem. India has the potential to be a giant market, which U.S. companies might need if they’re slowly squeezed out of China.

India’s relationship with the United States remains crucial to its own objectives, but is also ambiguous. The asymmetry of power between the two countries is such that the relationship, if potentially useful, is not necessary for the United States while potentially risky for India. Moreover, the shift of the political centre of gravity of Asia — resulting from the growing rivalry between China and the US — is eroding the foundations of India’s policy in Asia, while prospects for greater economic interaction is limited by India’s slow pace of reforms. The future of India-US relations lies in their capacity to evolve a new quid pro quo in which the US will formulate its expectations in more realistic terms while India would assume a larger share of the burden of Asia’ security. 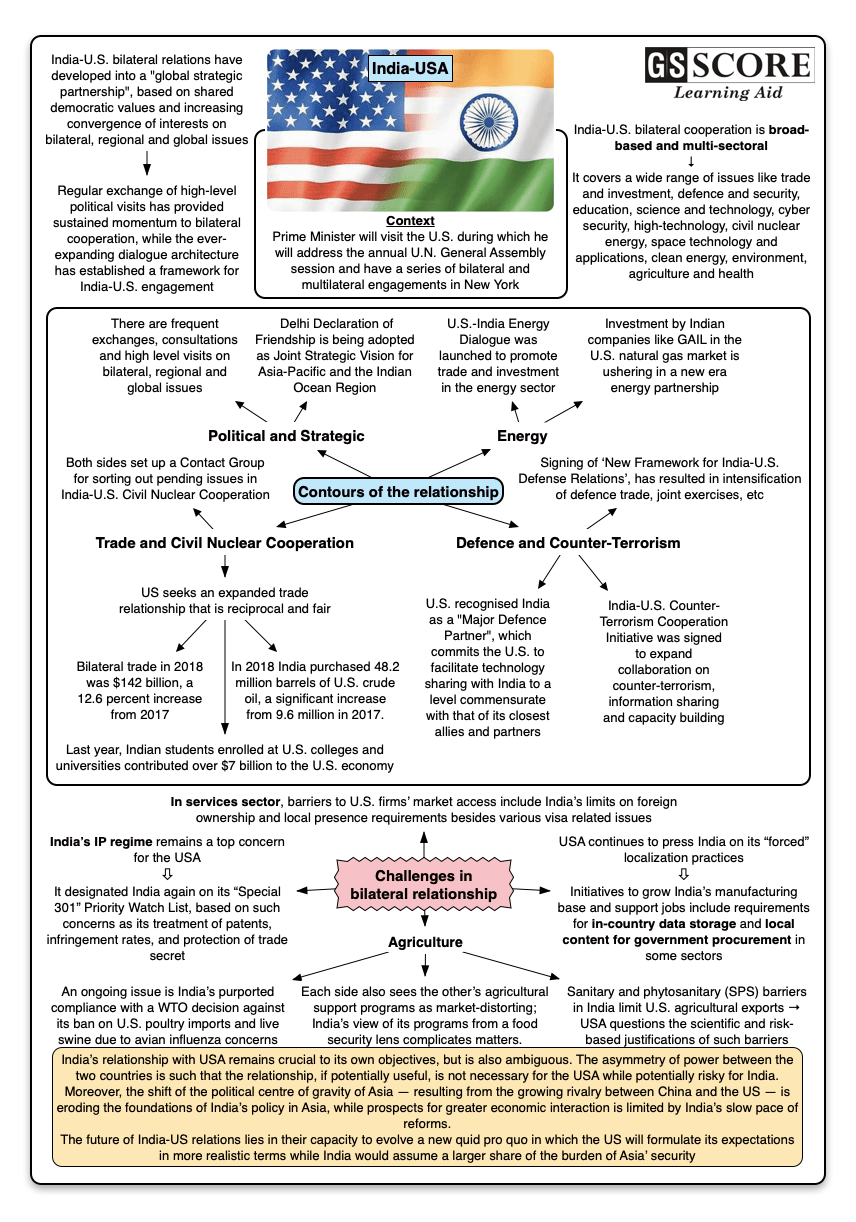