The Special Economic Zone (SEZ) Bill, 2019 has been recently passed by both Houses of the Parliament.

The Special Economic Zone (SEZ) Bill, 2019 has been recently passed by both Houses of the Parliament.

A Special Economic Zone is a geographical region that has economic laws that are more liberal than a country’s prevailing economic laws. In India SEZs are specifically delineated, duty-free enclaves that can be deemed as foreign territory for the purposes of trade operations, duties and tariffs. They can be set up by any private or public, Joint or exclusively State-owned, or even foreign-owned company, anywhere in India.  A multi-product SEZ is required to have 1000 hectares while the single product SEZ can be set up in as little 100 hectares.

Evolution of SEZ in India

Performance of SEZ in India

The three important objectives of the SEZs Act, 2005 are to generate employment opportunities, encourage investments and increase India’s exports.

But, as per CAG Report, SEZ units have been achieving the prescribed net foreign exchange (NFE) earnings mainly through domestic sales, defeating one of the sub-objectives of the scheme, which was to augment exports.

Overall, the SEZ scheme in India has shown a tremendous growth in infrastructure investment, employment and exports.  At the end of March 2019, the investment in SEZs was a whopping ?5 lakh crore plus and the employment was over 20 lakh and exports were over ?7 lakh crore

Positive Impact of SEZs on the Indian Economy

Negative Impact of SEZ in India

Despite the huge rate of approval and establishment of SEZs, and thus their apparent success, the development of SEZs has faced considerable opposition and is stalling in some cases. Some of the key problems due to SEZ are as follows:

Challenges faced by SEZ in India

Therefore, it cannot be denied that the objectives of the SEZ in terms of the production of goods and services of global standards, earning foreign exchange, improvement in infrastructure and employment are more relevant today than ever before. They probably need to be supported more through incentives and government interventions rather than being hounded as is no alternative to bring in Export led economic development.

Critically analyze the role of Special Economic Zones in the economic and social sphere of India. 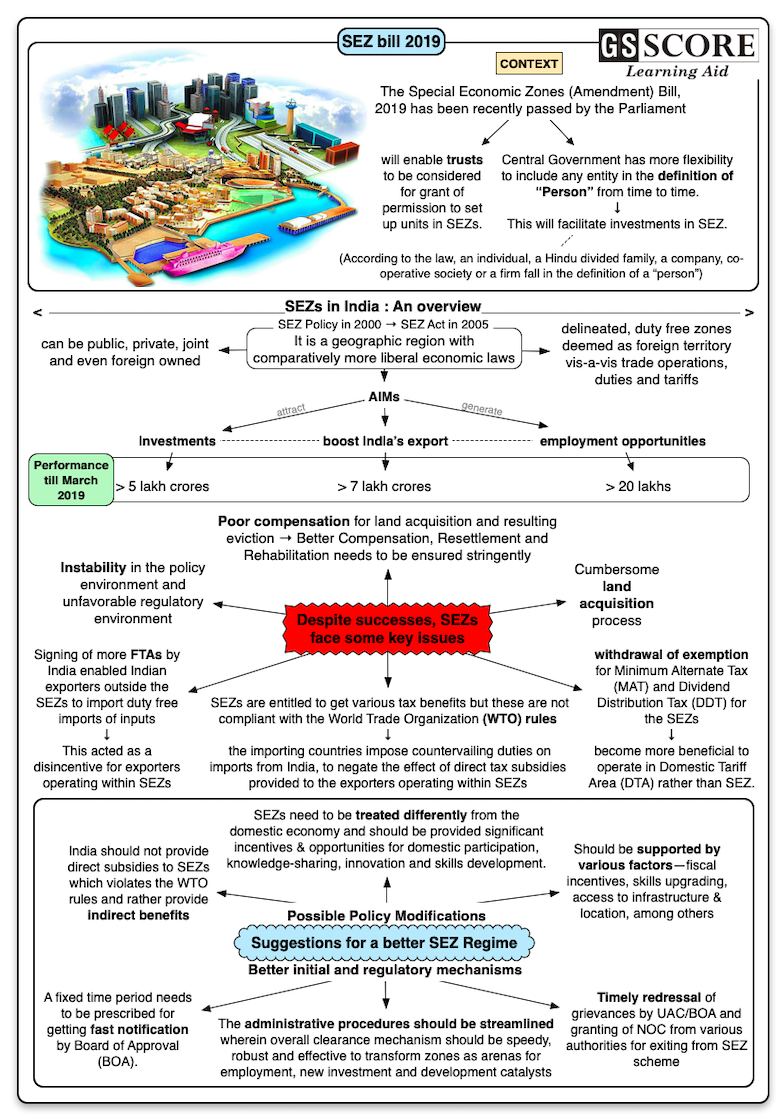