The Dravidian Movement and Aryan Illusion

The remarks made by the governor of Tamil Nadu on ‘Aryan-Dravidian differences’ being geographical and not racial have emerged and fuelled the discussion which has existed for a long. 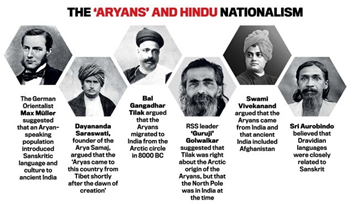 The debate over the Aryan-Dravidian Distinction:

The idea of an "invasion" has been discarded in mainstream scholarship since the 1980s and replaced by more sophisticated models, referred to as the Indo-Aryan migration theory.

Robert Caldwell (7 May 1814 – 28 August 1891) was a missionary for the London Missionary Society. He arrived in India at the age of 24 and studied the local language to spread the word of the Bible in a vernacular language, studies that led him to author a text on the comparative grammar of the South Indian languages.

Major Achievements of the movement:

India is a multi-cultural country, involving multi-ethnic origins, and this has been established by in-depth scholarship on linguistics, mythology, folklore and anthropology, archaeology, geology, big history, and genetics. It was based on these academic pursuits that linguistic studies have established the uniqueness of the Dravidian language family (Telugu, Kannada, Malayalam, Tulu, Tamil, and so on).

Any other theory created by any political or apolitical class must be viewed with suspicion in the face of overwhelming evidence supporting the migration of Indo-European speakers, who were called Aryans, to India almost 4,000 years ago.