According to data from the Ministry of Chemicals and Fertilisers, the sale of urea and di-ammonium phosphate (DAP) increased by 3.7% and 16.9%, respectively, from April-October 2022 over the previous year. 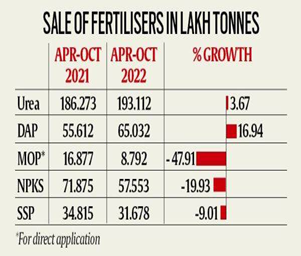 Reasons behind increased consumption of urea and DAP:

Over-use of fertilisers: India’s fertiliser sector has been riddled with distortions from excessive use of urea. The di-ammonium phosphate or DAP is seeing a similar phenomenon of over-application due to underpricing.

The effects of overconsumption of urea and DAP: