IAS Toppers Story: Shrestha Anupam, Rank-19 CSE 2019 “When father could not, the son fulfilled the dream of becoming IAS

In Hindu mythology there is a famous theory of “Rna”. As per the theory, a man is born with debt towards Parents, God and Nature. He has to pay back the debt and he has this as utmost moral responsibility. Story of Shrestha Anupam, AIR-19 squarely fits in this theory.

Story of Shrestha starts from Bhagalpur, Bihar, a historically important city of country. Father of Shrestha, Dilip Kumar Amar had dream of cracking Civil Services Exam. Being from conducive environment of University of Delhi, he attempted the exam but unfortunately he couldn’t clear it. Decades after, his son Shrestha Anupam cracked UPSC with remarkable rank. In words of Dilip Amar, “Cracking UPSC was my dream which remained unaccomplished. I had attempted civil services exam during my student life but could not get success. My son has fulfilled my desire. I am proud over his success and living my dream with his success.”

Shrestha prepared with full dedication and tried hard to crack in the first attempt only. But, destiny had some other wish. He couldn’t qualify in first attempt. He gave his next attempt with holistic homework on strength and weakness. And in his very second attempt, he got All India Rank-19.

Being a part of GS SCORE, Shrestha has outlined his strategy during his interaction with one of our Faculty Members. We can sum up his strategy as following:-

A. Institution of family plays a substantial role in the success journey. If helps us in managing our emotions during the stressful period of preparation. At times, moral pressure of family for success may have unwanted consequences. So, aspirants are suggested to always move with syncing their dream with aspiration of family.

B. Little interest towards humanities during academics itself pays us later. And this suggestion is especially important for people in technical studies. So aspirants in Colleges are advised to develop little orientation in humanities. Reading some novels in non fictional areas can serve the purpose.

C. Interest in a subject should be the fundamental criteria for selection of optionals. Aspirants should choose that optional in which they have high depth of interest. All other factors come secondary.

D. Aspirants having interest in writing blogs, stories, notes should stick to this hobby as it pays later in development of writing skills. In other words, our hobbies can become part of our preparation with little smart work.

E. Limited sources, carving out important areas, making short notes and connecting the dots through multiple revisions is key of memorising and reproducing the vast and bulky syllabus of UPSC. Notes making should not become making the replica of original text. It should be there only for important areas and that too in subsequent readings.

G. Test Series in both Prelims and Mains are extremely important part of preparation. Tests should be attempted in maximum possible environment of examination. Any test without rational analysis leaves vacuum in the preparation. To extract maximum output, students should wisely sort out their strengths and weaknesses.

We are proud that Shrestha Anupam was part of GS SCORE in the journey of IAS preparation. GS SCORE has continued the legacy of producing IAS TOPPERS every year.

GS SCORE ( iasscore.in) is a teaching platform for Civil Services Examination, both in classroom and online. Learning in GS SCORE is driven by two predominant objectives- excellence and empowerment. For us, excellence is a drive to challenge yourself to be better. Empowerment for us does not mean only stuffing your mind with facts and information but to ignite your mind for imagination and creativity to respond to all kinds of challenges with wisdom and confidence.

You can watch interview of Shrestha Anupam– https://youtu.be/Yoj9Su8No4Y 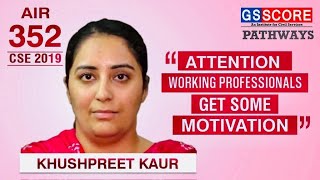