CBDC (Central Bank Digital Currency) is the digital form of fiat currency issued and regulated by central bank of a country which promotes financial inclusion and simplify implementation of fiscal and monetary policy.

Across the world, only 9 countries launched CBDC and 80 countries with CBDC initiatives are underway till date.

Finance minister during budget session 2022 announed; CBDC in India will be ready by 2023 and overseen by RBI.

Are crypto currency and digital currency same? What are the differences?

Finance minister announced during budget session 2022-2023 that “Non Fungible Tokens”-NFT’s will be taxed at 30% on any income from their transfer. On the same stage finance minister also announced rolling out of “Digital currency” by RBI sooner in 2023 called after “The Central Bank Digital Currency (CBDC)”. 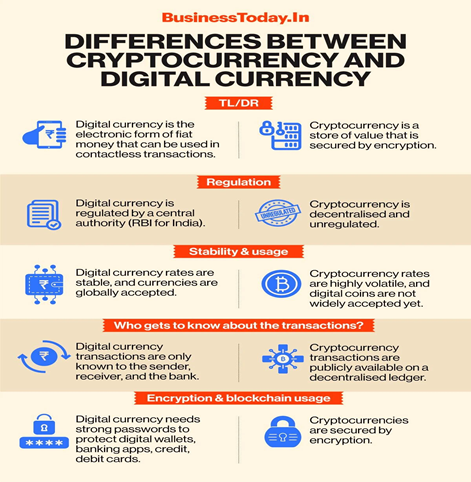 How is Digital currency different from UPI payments?

Unified Payments Interface (UPI) is a system that powers multiple bank accounts into a single mobile application (of any participating bank), merging several banking features, seamless fund routing & merchant payments into one hood. It also caters to the “Peer to Peer” collect request which can be scheduled and paid as per requirement and convenience.

There are many advantages of digital currency including:

"The Crypto currency and Regulation of Official Digital Currency Bill, 2021".  Is the only bill introduced in parliament related to crypto currency regulation in India which has major provisions such as

The Inter-Ministerial Committee (2019) noted that the technology underlying crypto currencies i.e., DLT, could improve the efficiency and inclusiveness of the financial system. It can help lower the costs of personal identification for KYC, and improve access to credit.  Global regulators (such as IMF) have also noted benefits of crypto currencies. These currencies could provide cheaper, faster and more efficient transactions.

How digital currency helps in India’s goal of 5 trillion dollar economy and challenge’s there in? 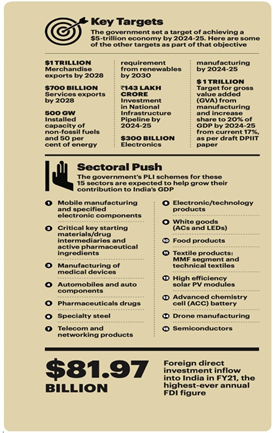 The digital currency plays a major role if considered in achieving 5 trillion dollar economy by 2025 based on its advantages over conventional currency, but the digital currency not yet rolled out and will ready by 2023 can be a challenge to Indian’s goal to become 5 trillion dollar economy. Additionally, the recent pandemic pushed back the growth rate and settled down at 8.2% for FY2023 following the ongoing Russia-Ukraine war.

According to the World Bank, India needs to create 8.1 million jobs annually to achieve its growth targets. But on other hand, The NASSCOM has recently said that the Indian Crypto currency market has been growing exponentially over the last few years and is expected to reach up to $241 million by 2030 in India and $2.3 billion by 2026 globally.

A recent study on “Crypto Industry in India” by the NASSCOM and industry partner WazirX also said that the Indian investors have shown keen interest towards adopting Crypto currencies such as Bitcoin, Ethereum, and Polygon to make investments that promise them viable returns.

Former RBI Governor Raghuram Rajan, while addressing Reuters Markets Forum recently, had also endorsed the potential in Crypto currencies. The Crypto currency might find a way to become an effective means of payment, he had added. 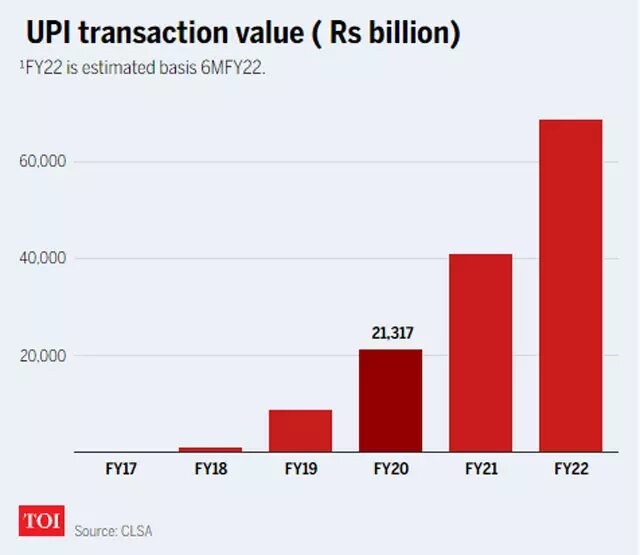 India as 3rd largest economy in the world, its ambition to join 5 trillion dollar economy club is a great challenge ahead as there are many issues within the country, across the neighbourhood and environmental concerns posing continues obstacles for growth. The growth in digital payments in India and thriving for CBDCs can enhance the efficiency of digital payments. Whether CBDC will eventually increase financial inclusion depends on the CBDC design. However the digital transactions growth in India is throwing a positive ray of hope on India’s digital currency revolution.