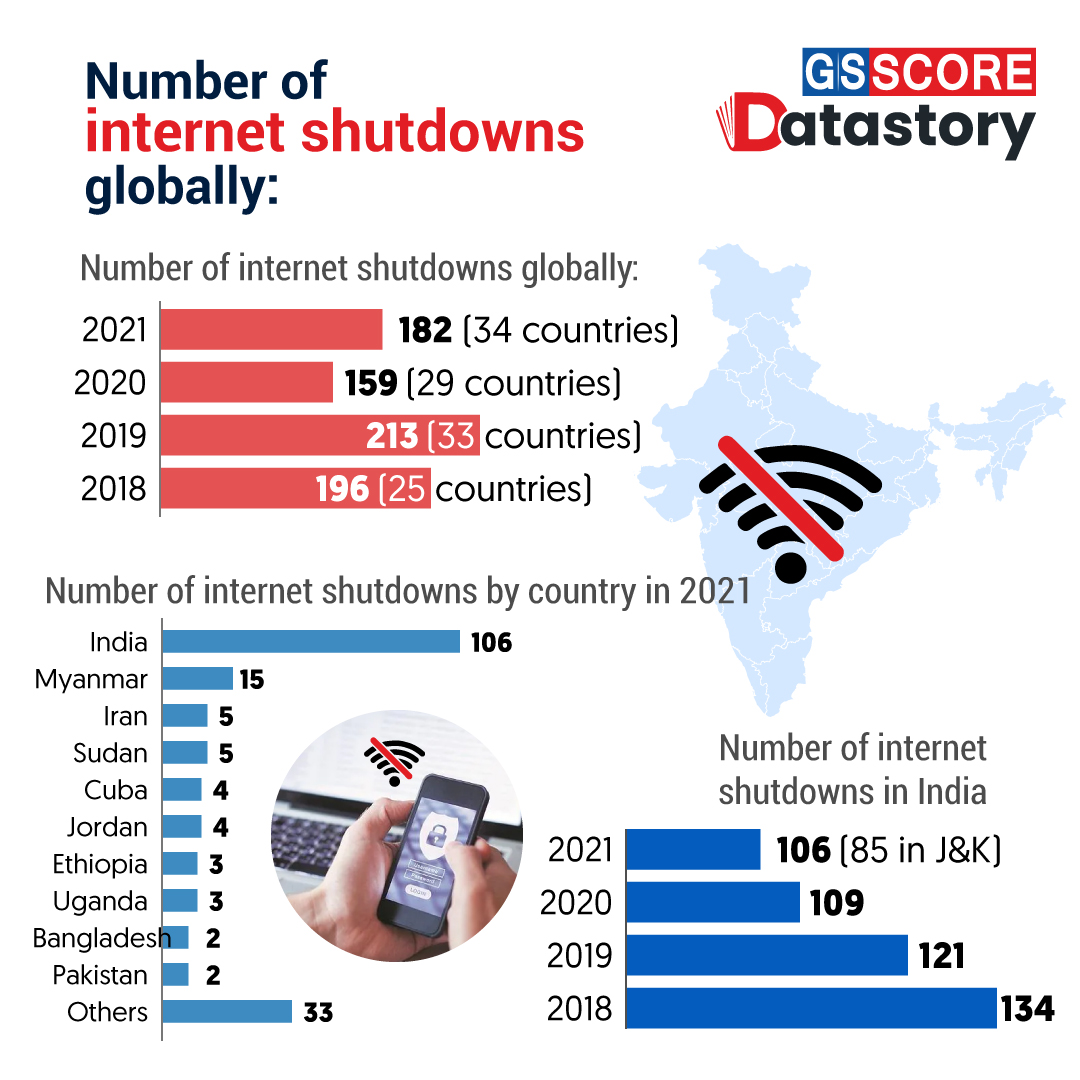 An internet shutdown has been defined as “an intentional disruption of internet or electronic communications, rendering them inaccessible or effectively unusable, for a specific population or within a location, often to exert control over the flow of information.” An internet shutdown happens when someone — usually a government — intentionally disrupts the internet or mobile apps to control what people say or do.

India was responsible for 106 incidents of shutdowns documented in 2021, making it the world’s biggest offender for the fourth consecutive year. After India, Myanmar imposed the highest total number of shutdowns in 2021, with 15 disruptions, followed by Sudan and Iran with five shutdowns in each country.

Of 106 shutdowns in India, 85 were in Jammu and Kashmir, a region where authorities continue to impose intentional internet disruptions that last for long periods, disrupting and endangering people’s lives for months on end.

The shutdowns Indian authorities imposed in 2021 drew international attention and condemnation. The government cut internet access in a clear attempt to suppress the Farmers’ Protests, a movement opposing the Parliament of India’s passage of three farm acts the previous year. Authorities plainly sought to prevent protesters from communicating with one another, and to obstruct press reporting. Despite the disruptions, the government was not able to conceal its violent crackdown on dissent and lawful protest.

In December 2021, India's Parliamentary Standing Committee on Communications and Information Technology released a report highlighting the misuse of internet shutdowns, and the impact on rights and freedoms, and making recommendations to the government to reform the framework governing suspension of telecom/internet services. While the report makes several positive recommendations aimed at enhancing transparency and accountability, and strengthening safeguards, it does not altogether condemn the use of internet shutdowns, and fails to state one of the most important facts of internet shutdowns: they can never be justified.

Shutdowns have dangerous consequences for human rights and democracy. Internet shutdowns nurture a culture of impunity for crimes committed against people and keep the rest of the world in the dark with regard to the scale and intensity of the situation. They make it difficult for journalists and human rights defenders to gain access to the affected areas in order to report on happenings and hold governments accountable for atrocities.

This data story aims to highlight the statistics of internet shutdowns in the world in general and India in particular.