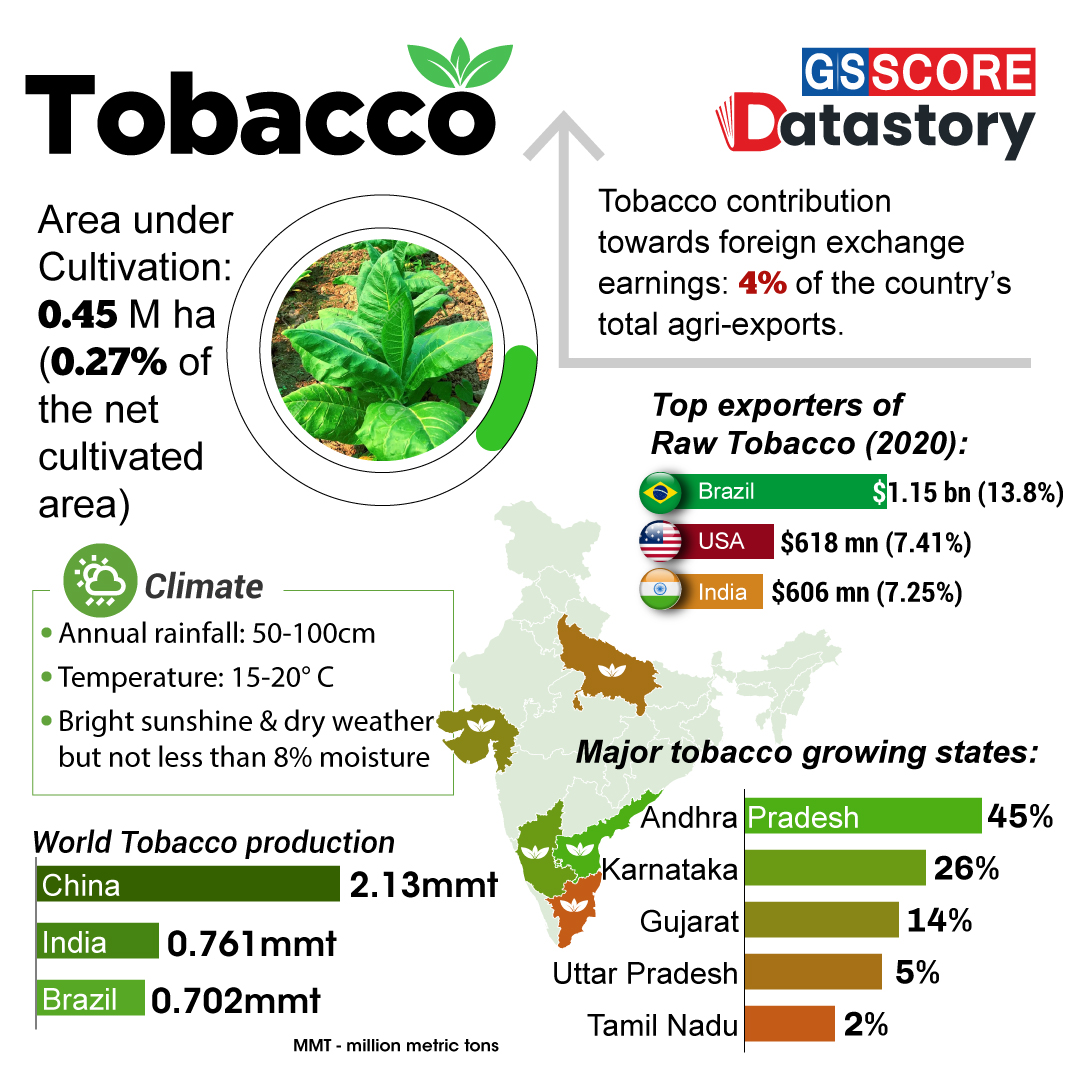 Tobacco is one of the most economically significant agricultural crops in the world. It is a drought tolerant, hardy and short duration crop which can be grown on soils where other crops cannot be cultivated profitably. In India, Tobacco crops are grown in an area of 0.45 M ha (0.27% of the net cultivated area) producing ~ 750 M kg of tobacco leaf. India is the 2nd largest producer and exporter after China and Brazil respectively. The production of flue-cured Virginia (FCV) tobacco is about 300 million kg from an area of 0.20 M ha while 450 M kg non-FCV tobacco is produced from an area of 0.25 M ha. In the global scenario, Indian tobacco accounts for 10% of the area and 9% of the total production.

Unique feature of tobacco production in India is that varied styles of Flue-cured Virginia (FCV) and different types of non-FCV tobacco are produced under diverse agro-ecological situations spread all over the country. About 15 states in the country grow tobacco, significantly influencing the economy and prosperity of the farming community. FCV, Bidi, Hookah, Chewing, Cigar-wrapper, Cheroot, Burley, Oriental, HDBRG, Lanka, Pikka, Natu, Motihari, Jati etc. are the different types of tobacco grown in the country. FCV, Burley and Oriental tobacco are the major exportable types.

Tobacco provides livelihood security to 36 million people including 6 million farmers and 20 million farm labour engaged in tobacco farming besides 10 million people working in processing, manufacturing and exports, in India. Bidi rolling alone provides employment to 4.4 million people and 2.2 million tribals are involved in tendu leaf collection. The main beneficiaries are the small and marginal farmers, rural women, tribal youth and weaker sections of the society. Annually, tobacco contributes ` 4,400/- crores towards foreign exchange earnings accounting for 4% of the country’s total agri-exports and ` 14,000 crores to excise revenue which is more than 10% of the total excise revenue collection from all sources.

India enjoys an edge over the leading tobacco-producing countries in terms of low production cost, average farm and export prices. Thus, Indian tobacco is considered as ‘value for money. India is one of the leading exporters of tobacco and occupies second place after Brazil. The country accounts for 6% by volume and 0.7% by value of the world tobacco trade and 80-85% of our exports continue to be FCV alone. During the past five years, exports of tobacco and tobacco products increased by 76% and 209% in quantity and value terms, respectively. UK, Germany, Belgium, the erstwhile USSR, South Korea and South Africa are the major importers of Indian FCV tobacco accounting for more than 60% of our exports. At present, Brazil, Zimbabwe, Turkey, China and Indonesia are the competitors to India in the export market. India’s share in the world cigarette exports is less than 1% only. However, the exports of scented Bidis, Hookah tobacco paste, scented chewing tobacco and Zarda are noteworthy and there is a scope for augmenting the exports of these products in the near future.